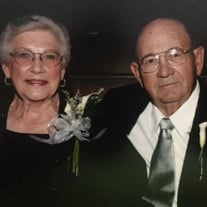 John K. Harris, 88, of Terrell, passed away July 29, 2017, surrounded by family. He was born July 28, 1929 in Farmersville, TX to the late John S. and Mayda Thompson Harris. John graduated from Farmersville High School in 1947. Next door to his dad’s auto repair shop was a funeral home where he began work part time. It was here he learned of his compassion and caring for the deceased. John decided to go to mortuary school and attended Gupton Jones School of Mortuary Science (later known as Dallas Institute of Funeral Service) graduating in 1949. Afterwards, John entered the U.S. Army during the Korean Conflict. He was originally assigned to a platoon whose job was to disarm mines in the field. Once the Army learned of his embalming skills, he was assigned to the 114th Grays Registration Company, where he managed the preparation rooms, airplane disaster recovery, embalming, and the shipping of deceased veterans back home to their families. It was here that John developed the expertise of restoring a body. In his trade, he was a true artist, knowing fully well how important seeing a loved one would be to a family., Every service man or woman was given the utmost respect, right down to their boots. After being discharged, John moved to Terrell in 1954 and joined Anderson-Clayton Bros. Funeral Home. It was through mutual relationships with the Claytons that John met Joan Kelpen and they were married February 18, 1955. While at Anderson-Clayton, John’s well-known skills in restorative art enabled him to train many apprentice funeral directors and embalmers. His passion was to compassionately serve families and the motto he and others kept was “serve above self.” John remained with Anderson-Clayton until his retirement in 1979. Retirement was not what he thought, so in 1980 John opened Harris Feed Store. As many are aware, he “sometimes” sold feed, but the store became a more of a place for farmers, ranchers, highway patrol, or anyone passing by to hang out, have a bit of lunch, and tell stories. At this place, the problems of the world were discussed, some solved, but by far, most important, were the many deep relationships formed around an old wooden table and a pot belly stove. John operated the feed store until selling the business in 1994, after which he and Joan, both now being retired, began traveling around the United States in a Fifth Wheel. During their many travels, John and Joan saw most of the United States and Canada, while making many deep friendships, most of which have lasted until now and will continue for Joan. John also served, and retired after 32 years, from the Terrell Volunteer Fire Department. It was here that he and other dedicated community members helped form the Rural Fire District to ensure fire protection for those living outside the city limits. He was especially proud there was enough money raised to purchase more than one fire truck for rural fire departments. John was a member of Colquitt Road Church of Christ, He is preceded in death by his parents, daughter Jennie Harris, son Jeff Harris, granddaughter Jennie Slayton and sister Jerry Bates. Surviving him are his wife Joan Harris of Terrell; daughter Jill Slayton-Cauble and husband Jerry of Terrell; grandchildren Lindsey Webb and husband Justin of Terrell and Hannah Mack and husband Justin of Terrell; great-grandchildren: Brayden, Tenley and Style; brother-in-law Earl Bates and his wife Phyllis of Farmersville; niece, Kaye Wilson and her daughter Shelby; nephew, Paul Bates and his wife Kerri and his children Justin and Breann, all of Farmersville; and a host of friends. Funeral services will be at 10 a.m. Thursday, August 3, 2017 at Max Slayton Funeral Chapel, with interment to follow with military honors at Oakland Memorial Park. Family will receive friends from 6 to 8 p.m., Wednesday, August 2 at max Slayton Funerals and Cremations, 642 N. Rockwall Ave., Terrell, TX 75160. In lieu of flowers, memorials may be made to Colquitt Road Church of Christ, 1350 Colquitt Road, Terrell, TX 75160 or Terrell Volunteer Fire Dept., P.O. Box 2071, Terrell, TX 75160.

John K. Harris, 88, of Terrell, passed away July 29, 2017, surrounded by family. He was born July 28, 1929 in Farmersville, TX to the late John S. and Mayda Thompson Harris. John graduated from Farmersville High School in 1947. Next door to... View Obituary & Service Information

The family of John Kenneth Harris created this Life Tributes page to make it easy to share your memories.

Send flowers to the Harris family.