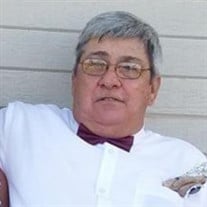 John Louis English, 63, of Kaufman, TX, went to be with the Lord on June 14, 2021. Louis was born April 2, 1958, in Terrell to his loving parents, Betty G. and Allen English, who were both there to welcome him into Heaven. Louis was raised in Kaufman, and he made it his home throughout his life. He attended Kaufman High School before going on to join the US Army. He served his country proudly until he was honorably discharged. After leaving the service Louis went to work at Technical Plastics in Terrell. It was there he met his soulmate, Debra Ann Hickson, the two were inseparable and married October 1, 1976, in Terrell. He and Debbie made their home in Kaufman and raised children there. As his children grew, he would often take on the role of coach for his daughter’s basketball or his son’s soccer teams. Louis went on to further his career by driving the RPS “big rigs”. He continued driving for several years before an injury made him unable to continue. Louis took this time to enjoy his family and friends. He loved going fishing and hunting and even went on several Deep-Sea Fishing trips in Galveston. Every football season Louis would say, “This is our year” as he was preparing to cheer on his favorite team, The Dallas Cowboys. Outside of football season there was only ever an ‘old country western show’ on the television, and everyone knew not to touch the remote. Louis was an all-around lovable man who never met a stranger and treasured his wife, children, and grandchildren more than anything. He was always there for anyone who needed him, a caring husband, father, grandfather, uncle, brother-in-law, and father-in-law. Louis leaves behind a giant legacy of love. Those who are here to miss him but cherish his legacy are his wife, Debbie English of Kaufman; son: John Allen English and his wife, Stephanie; daughter, Ashley Lewis and husband, Brian; son, Chris Peek and wife, Lorrie; grandchildren: Brinden Peek and wife, Airo; Cloie Peek, James Bearbow, Alizae Wren, Cedrick Wren, Jr., Zoey Lewis, Ashton English and Erika English; 1 great grandson on the way, Courtney Hendrix, Jr.; brother in law Larry Hickson and wife, Melinda as well as several nephews and nieces, cousins and a host of friends all who will miss Louis. Funeral service will be 11:00 a.m. Tuesday June 22, 2021 at Max Slayton Funeral Chapel. Louis' family will receive friends on Monday, June 21, 2021 from 6:00 p.m. to 8:00 p.m. at the funeral home.

John Louis English, 63, of Kaufman, TX, went to be with the Lord on June 14, 2021. Louis was born April 2, 1958, in Terrell to his loving parents, Betty G. and Allen English, who were both there to welcome him into Heaven. Louis was raised in... View Obituary & Service Information

The family of John "Louis" English created this Life Tributes page to make it easy to share your memories.

Send flowers to the English family.