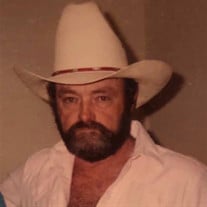 Richard Bostick, longtime resident of the Terrell area, passed away on July 29, 2019. Born John Richard Bostick on August 14, 1938, Richard was one of ten children to Frank and Nellie (Sluder) Bostick. He was preceded in death by his parents, infant daughter, Barbara Nell Bostick, son, Rowdy Bostick and his siblings: Mary, Harold, Ruby, R.C. Faye, Doris, Ray and Clyde. Coming from a large family and growing up in the Poetry area back when it was mainly farmland, Richard had a love for always being around other people and simple country living. Any gathering was a great time to see and visit with him to catch up on what was going on in his life. He worked as a sheet rock installer at many construction projects and developments around the counties of Kaufman, Rockwall and Dallas and even, on occasion, had the chance to travel to Colorado to work on commercial buildings. He loved to fish and he would always have a secret fishing hole that would ensure that he always had a catch to bring to get together or to have a fresh dinner. He enjoyed getting the chance to travel when he could and his unique sense of humor and wisdom will be missed. Richard is survived by his children: Richard Dale Bostick, Christie Bostick, Tony Bostick, Tammy Bostick-Edwards, Mark Bostick, Morgan Daws and John Curtis (JC) Bostick; 21 grandchildren and 28 great grandchildren; and sister, Ann Robinson as well as other extended family members and friends who will miss him greatly. A celebration of life for Richard will be held at 3:00pm, Saturday, Aug. 10, 2019 at Epic Life Church in Terrell with the family inviting all to share their favorite memories of his life.

Richard Bostick, longtime resident of the Terrell area, passed away on July 29, 2019. Born John Richard Bostick on August 14, 1938, Richard was one of ten children to Frank and Nellie (Sluder) Bostick. He was preceded in death by his parents,... View Obituary & Service Information

The family of John Richard Bostick created this Life Tributes page to make it easy to share your memories.

Send flowers to the Bostick family.