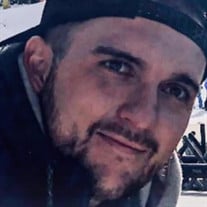 Jordan Todd Smith, beloved son, father, grandson and friend, passed away on Feb. 26, 2022. Jordan was born on November 3, 1993 and grew up in the close knit communities of Terrell, Forney and Crandall. He graduated from Crandall High School in 2012. As a youth and young man, Jordan was an active player in little league games playing baseball. His love of the game stayed with him all through high school as well where he became a noted athlete on Crandall’s baseball team. He had many coaches throughout his lifetime, all of whom enjoyed coaching Jordan and frequently remarked on his coachability, his endurance, his talent and, above all, his heart and loyalty for his teammates. Jordan was a beloved big brother to Jaci and she looked up to him and he looked out for her. He also had a great love for the rest of his family especially his grandparents, Lynda and Frankie Smith. His close relationship with Frankie, Jordan’s Poppa, was the foundation of Jordan’s character. For all of Jordan’s life, he and Frankie would spend time together watching the Cowboys play, watching any other sport they enjoyed and discussing each other’s life and their thoughts about everything. Jordan also had an appreciation for the mountains and the ocean and in 2021, with his girlfriend, Alex Maynard, they moved to Oregon to relocate for an opportunity for him to work in the hospitality industry. Happiness followed Jordan everywhere he went and soon, he and Alex were starting their lives together with a baby girl eagerly anticipated by them and Jordan’s family takes great comfort in knowing that his legacy will go on for future generations with the birth of his precious daughter, Kaylynn Jordan Skyy Smith. A wonderful young man with a generous heart and incredible spirit, Jordan will be missed greatly and never forgotten. He leaves to cherish his memory to his girlfriend, Alexandria (Alex) Maynard of Coos Bay, OR; infant daughter, Kaylynn Jordan Skyy Smith of Coos Bay, OR; mother, Lori Smith and step-father, Eddie, of Terrell; sister, Jaci Smith; father, Wesley L. Cunningham and wife, Caroline; half-sisters, Alexis Cunningham and Averi Cunningham; step-brother, Jared Miller; grandmothers, Lynda Smith and Lynn Cunningham as well as many other extended family and a host of friends, all of whom loved Jordan so very much. A celebration of Jordan’s life will be held at 2:00pm, Sunday, May 1, 2022 at Ben Gill Park Pavilion, 1039 9th St, Terrell, TX, 75160 where all are invited to share memories of Jordan and his legacy.

Jordan Todd Smith, beloved son, father, grandson and friend, passed away on Feb. 26, 2022. Jordan was born on November 3, 1993 and grew up in the close knit communities of Terrell, Forney and Crandall. He graduated from Crandall High School... View Obituary & Service Information

The family of Jordan Todd Smith created this Life Tributes page to make it easy to share your memories.