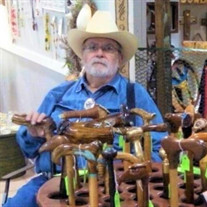 Joseph William Caldwell, 73, passed away peacefully with his loving wife at his side on July 23, 2020. Joseph was born February 7, 1947 in Amarillo, Texas to Alice (Smith) and George Caldwell, Sr, both of whom preceded him in death along with brother, George Caldwell, Jr. Joe enlisted in the United States Navy with honor and distinction and served during the Vietnam War. During active duty, Joe also served as a dental technician until his honorable discharge in 1972 after which he went on to work at United States Postal Service until his retirement in 2001. After retirement, Joe immersed himself in spending time with his hobbies. Woodworking was his favorite and he could create anything. A master craftsman with his hands, Joe was also a very good artist with drawing and painting where some of his designs would go on to be sold professionally. He joined the Forney Art Council where he was a key member in advocating for all artist expressions and helping the community develop an appreciation for local artists. Joe was also a member of the Talty Baptist Church where his easy smile and his friendly personality was always a welcome sight to both members and visitors. A hardworking, loving man, Joe will be missed by everyone that knew him. He is survived by his beloved wife, Carol Caldwell of Garland; daughters: Priscilla Valentine and husband, Galen and Jennifer Caldwell; stepson, Chris Henson and wife, Lydia; stepdaughter, Denna Shives and husband, Jimmey; grandchildren: Chance Caldwell, Dante Herndon, Corey Caldwell, Branndon Norwood, Seth Shives, and Deanna Ross; great granddaughter, Katie Caldwell as well as other extended family and a host of friends. For those who wish, memorials may be made in Joseph’s memory to the Talty Baptist Church at 5210 N Farm to Market 148, Crandall, TX 75114.

Joseph William Caldwell, 73, passed away peacefully with his loving wife at his side on July 23, 2020. Joseph was born February 7, 1947 in Amarillo, Texas to Alice (Smith) and George Caldwell, Sr, both of whom preceded him in death along with... View Obituary & Service Information

The family of Joseph William Caldwell created this Life Tributes page to make it easy to share your memories.

Joseph William Caldwell, 73, passed away peacefully with his...

Send flowers to the Caldwell family.