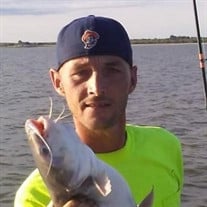 Joshua Paul Armstrong, beloved son, brother, grandson, nephew, cousin and friends, was born in Dallas, Texas on March 16, 1985, and passed from this life on November 10, 2021. Josh was welcomed into Heaven by his grandparents: Bonnie and Anita Rice, Athol and Paula Armstrong, Johnny and Jessie Jetton; uncles: Ricky Rice, Terry Jetton, and Larry McBride as well as his cousin, Keith Holick. Josh was a free spirit. He loved playing sports, although he was a sore loser especially when he lost to his female cousins! He was an avid Dallas Cowboys fan along with the Texas Rangers and Dallas Mavericks. He also loved the Florida State Seminoles because his Aunt Pat would send him souvenirs from her home in Florida which allowed him to tell people that she was from sunny and beautiful Florida. Josh often talked about fishing with his beloved Grandma Armstrong and how much he loved her. He also had a special bond with his Mema Rice and, together, they were trouble with a capital T and often made people laugh at their antics over the years! Josh had a love for each person he met with so many saying how polite he always was to others. He was well known for his big hugs and, whether you knew him for a moment or a lifetime, he had a gigantic hug for you. During high school and after, his classmates loved him, and he loved them. He was a social butterfly and if he ran into someone he knew, they had better take a seat because they were going to be there for a while getting a chance to catch up on stories and life. Josh never met a stranger and had a heart of gold. His generosity and his kind personality will be a treasured legacy that each person who knew him will proudly carry on. Those left to mourn Josh’s loss are his parents: Susan and Phillip McBride and Phillip and Sandra Armstrong; sisters: Emily McBride, Stacy and husband, Sarge Warren; brothers: Brandon and wife Alexandria, Dustin and wife Lori, Colin and wife Dixie, Brian and wife Ashley; nieces: Railey Armstrong, Reese Garcia, Lindsey, Hayley, Megan and Madison, Nikki, Brittani, and Sabrina; nephews: Brayden Armstrong, Easton McBride, Jarek, Brawner, Brantley, Hayden, Mason, Owen, Case, and Amari; aunts: Vicki Rodriguez and husband, Lupe, Nancy Jetton, and Pat Lawson; uncles: Junior Armstrong and wife, Martha, Paul Armstrong and wife, Karen, Jeff Jetton and wife, Sandy; cousins that he loved like his own siblings: Paula (Jasen), Angela, Christine, Sharlena, Austin, Johnny, Lindsey, Christopher, and Jerry; grandparents: Frances Rodriguez, Daniel and Ada Garcia, as well as many more nieces and nephews, cousins, other extended family and a host of friends, all of whom loved Josh dearly and will miss him greatly. A celebration of Josh’s life will be held at 7:00 p.m. on Saturday, November 20, 2021 at Max Slayton Funeral Chapel. The family will be receiving friends starting at 6 p.m. to service time.

Joshua Paul Armstrong, beloved son, brother, grandson, nephew, cousin and friends, was born in Dallas, Texas on March 16, 1985, and passed from this life on November 10, 2021. Josh was welcomed into Heaven by his grandparents: Bonnie and Anita... View Obituary & Service Information

The family of Joshua Paul Armstrong created this Life Tributes page to make it easy to share your memories.

Send flowers to the Armstrong family.