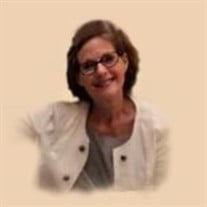 ***Mrs. Lewis' Celebration of Life will be livestreamed on First United Methodist Church's Facebook page at https://www.facebook.com/FUMCTerrell In accordance with current COVID-19 restrictions and if you are planning to attend her service in person, we ask that you please wear your mask/facial covering, check temperature and sanitize hands upon entry to the church. There is limited seating due to social distancing protocols in place in the sanctuary. On behalf of Mrs. Lewis' family and First United Methodist Church, they thank you for your cooperation and understanding. *** Joyce Lewis, longtime resident of Terrell, passed away peacefully at her home on December 28, 2020, surrounded by her family. A celebration of her life will be held at 11 a.m. on January 4, 2021, at First United Methodist Church, Terrell. Joyce was born on August 4, 1951 to Howard Reinsch and Barbara Lovelett in Enid, Oklahoma. On that day her father earned his pilot wings in the United States Air Force and became the father of twin girls, Joyce and Janet. Her father was a career Air Force Officer and flew B-52s for Strategic Air Command. They lived in several air bases in the Midwest where she lived with her parents, twin sister, and younger sister, Suzanne. She graduated from MacArthur High School in San Antonio, Texas. After high school she attended the University of Texas at Austin and was a member of Alpha Gamma Delta women’s sorority. She met her future husband, David Lewis, while there and earned her degree in history. They married in the Randolph Air Force Base Chapel in San Antonio on July 31, 1971, and soon moved to Terrell. Joyce had a passion for child development and started her career as a Child Welfare Worker in the Kaufman County Courthouse that lasted for seven years. She loved being a wife, homemaker and mother of two sons, James and John. Her second career that lasted over two decades is the one she is most known for, teacher and director of Methodist Pre-School. She loved her students and they loved her. Many could only say “Mrs. Wewis”, but she loved it. She was a member of First United Methodist Church in Terrell and the Social Science Club. Preceded in death by her father, Joyce is survived by her mother, Barbara Bearr of San Antonio; husband David and sons: James Lewis of Terrell, and John Lewis and fiancée Meara Chadwick of Austin, and their beautiful baby girl Amelia Lewis; sisters: Janet Scott and her husband, Hugh Scott of San Antonio and Suzanne Valentine and her husband Chuck Valentine of Mobile, Alabama; nieces: Katherine Cezeaux and husband Jason, of Dayton, Ohio, their children, Claire, Madeleine, and James and Lauren McCarthy and husband, Christopher, of Richardson, and their son Collin as well as other extended family members, church family, a host of friends and beloved students, all of whom will miss her dearly. In lieu of flowers a memorial may be made to Methodist Day School, 503 W. College St., Terrell, Texas 75160.

***Mrs. Lewis' Celebration of Life will be livestreamed on First United Methodist Church's Facebook page at https://www.facebook.com/FUMCTerrell In accordance with current COVID-19 restrictions and if you are planning to attend her service... View Obituary & Service Information

The family of Joyce Lewis created this Life Tributes page to make it easy to share your memories.

***Mrs. Lewis&#39; Celebration of Life will be livestreamed on First...

Send flowers to the Lewis family.