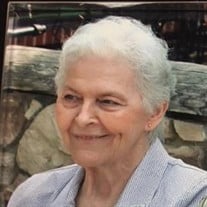 Jrene Wofford, 94 of Terrell—cherished and loving mother, grandmother, and great-grandmother—went to Heaven on Oct. 23, 2018. She was born in Henderson County in 1924 to Felix LeRoy Rhodes and Vera (Pickle) Rhodes. Jrene was preceded in death by her parents; her husband, George William (GW or Bill) Wofford; her grandson, Brady Berry; her sister, Valdene Chilcoat; and several half-sisters and cousins. Upon Jrene’s arrival in Heaven, she was ecstatically welcomed by all who had gone before her but most especially with a big hug by her grandson, Staff Sgt. Brady Berry. When she was born, her father gifted her the unusual name of “Jrene”, which was the name of a little girl he had met years earlier. Throughout her life, Jrene was frequently correcting people who insisted on calling her “Irene”; even the IRS addressed her tax forms to “Irene” Wofford! During WWII Jrene worked at Terrell Airport, where the British pilots trained, while her fiancé, Bill Wofford, served in the Aleutian Islands, Alaska. Upon his return, they married and had three children: George William (Bill) Jr., Sara, and Jennifer (Jenny). Jrene worked at Kelpen’s Ice Cream as a secretary before joining the staff of Terrell State Bank. During her 30+ years there, she served as executive secretary to the bank’s numerous presidents and, eventually, as a vice president herself. Her love and support of her family knew no bounds. She and Bill, Sr. attended both baseball and football games for their son, and years later they attended Tigerette performances for their daughters. When the next generation of Wofford offspring started playing sports, Jrene attended more football and soccer games, frequently during inclement weather proving that her love and support for them was limitless. She is survived by her son, George William (Bill) Wofford Jr. and his wife, Jimmie; her daughter, Sara Campo and her husband, Dan; and her daughter, Jenny Berry and her long-time boyfriend, Gregg Woods. In addition, Jrene leaves behind four grandchildren: Steven Wofford and his wife, Cici; Jeremy Wofford and his wife, Misty; Blake Berry; and Amanda Campo. Also, she is survived by six Wofford great-grandchildren: Chasity, Brandon, Connor, Dillon, Hayden, and Logan. Finally, she is survived by her cousin, Mildred Sebastian Wright, as well as numerous nieces and their families and a host of friends. Funeral services will be at 11:00am, Thursday, October 25, 2018 at Max Slayton Funeral Chapel with a private interment to follow. Family will receive friends 6:00-8:00pm, Wednesday, October 24, at the funeral home. Jrene’s grandsons and great-grandsons will serve as pallbearers. SSgt. Berry will be her heartfelt pallbearer as he carries her into Heaven. The family asks that, in lieu of flowers, donations be made in honor of Jrene to Alzheimer's disease and research at www.alz.org.

Jrene Wofford, 94 of Terrell&#8212;cherished and loving mother, grandmother, and great-grandmother&#8212;went to Heaven on Oct. 23, 2018. She was born in Henderson County in 1924 to Felix LeRoy Rhodes and Vera (Pickle) Rhodes. Jrene was preceded... View Obituary & Service Information

The family of Jrene Wofford created this Life Tributes page to make it easy to share your memories.

Send flowers to the Wofford family.