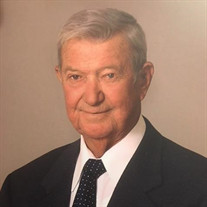 Kleber Lipscomb Breeden, Jr. was born on the Breeden family homeplace in Terrell, Texas on August 16, 1927, to Kleber Lipscomb Breeden, Sr. and Minnie Miller Breeden. As the oldest of three children, K.L. had a brother, Peter M. Breeden, and a sister, Sally B. LaRoe. K.L. attended Terrell public schools and graduated from Terrell High School in 1946. While in high school, K.L. enjoyed playing football and participating in Future Farmers of America. After graduating from high school, K.L. attended Southern Methodist University, majoring in business and insurance. K.L. was a leader in every activity in which he was involved. While he was at SMU, K.L. was Cadet Colonel and Corp Commander of the Air Force R.O.T.C. After graduating from SMU, he was commissioned as a 2nd lieutenant in the United States Air Force. While young men, K.L. and Dewey Samuels became Scout Masters of Troop 391 at the First United Methodist Church in Terrell. Many of K.L.’s fondest memories were the years he and Dewey spent scouting. Throughout the years, K.L. always cherished his relationships with former scouts. During that time, he had a young scout named Jim Bob Wynne. While visiting Jim Bob in Poetry, he met the feisty Joanne Wynne, Jim Bob’s sister. K.L. and Joanne later married at Poetry United Methodist Church on August 15, 1953. The next year, James Wynne was born, and three years later came along David Lipscomb. K.L. liked to say he was born into trucking. His father started out as an owner-operator and founded K.L. Breeden & Sons in 1933. Eventually, K.L. and his brother Pete drove for their father. K.L. began working at Refrigerated Transport, Inc. for Mack and Cy Weller in 1952. Cy became K.L.’s mentor and lifelong inspiration. The Breeden Family owes a lot to Cy Weller. K.L.’s devotion to the trucking industry was displayed throughout his career. K.L. was active on several trucking association boards. He served as Chairman of the Texas Motor Transportation Association and on the executive committee of the American Trucking Association for many years. With Joanne by his side, K.L. enjoyed traveling the world with his colleagues from the trucking industry, making many lasting friendships along the way. In addition to his business endeavors, K.L. was very active in the growing community of Terrell. K.L. served as President of the Terrell School Board, Director of the Terrell State Bank, Board President of Boles Children’s Home, and was a leader in numerous other worthy organizations. K.L. was proud that his grandfather, Peter Curley Breeden, was a founding member of the Church of Christ in Terrell. K.L. served several terms as elder and loved the church with all his heart. K.L. had a very deep love for his family, and every addition only made his love and commitment grow deeper. As his sons married and had families, they enjoyed many family trips to Lake City, Colorado during the summer. K.L. also loved being outdoors, spending many hours in the country checking on the “girls” (his cows) and all the various activities involved in caring for them. Nearly every Saturday, K.L. and Bill Massingill would hop in the truck and ride around checking on the cows. Throughout the decades, K.L. made multitudes of friends. He and Joanne developed a strong relationship with a travel group known as the Vicers led by Tom and Rose Snow. K.L. and Joanne traveled the world with the Vicers and made many memories lasting a lifetime. Whether through work, church, community, or family, K.L. was a loyal, trustworthy friend. His word was strong, and one could always believe and trust that K.L. would make every effort to stand by his word. He was strong in spirit and action; gentle in care and compassion. K.L. passed away peacefully on November 15th on the same Breeden family homeplace where he was born, surrounded by his family. At 91 years of age, K.L. led a life full of joy, hope, challenge, success, sorrow, and pride. However, his greatest accomplishments can be measured by the care and love K.L. gave to his family. He was a business leader, a church leader, a community leader, but most of all, he was a family leader. K.L. will be dearly missed. K.L. was preceded in death by his parents, K.L. Breeden, Sr. and Minnie Breeden; his brother Peter Breeden, his sister Sally LaRoe, and other aunts, uncles, and cousins. He is survived by his dear wife, Joanne W. Breeden; sons and daughters-in-law Wynne and Liddy, David and Kristen; grandchildren Wynne, Jr. and wife Lacey, Emma and husband Matt Kirk, Harrison; Peter and wife Mackenzie, Graham, Laura, and Leslie. He is also survived by his treasured great-granddaughter, Watson Jean Breeden (Papa’s girl); brother-in-law John LaRoe; brother-in-law and sister-in-law, Jim Bob and Yvonne Wynne; nephews, Bruce Hershey and James Robert Wynne; niece Ginny Hershey-Lambert; great-niece Danielle Wynne, and many other special cousins and family members. In lieu of flowers, memorials may be made to: Rockwall and Brin Church of Christ 407 N. Rockwall Street, Terrell, TX 75160 or to The National Kidney Foundation at www.kidney.org or to the charity of your choice. A celebration of his life will be held at 11:00 a.m., Monday, November 19, 2018 at Rockwall and Brin Church of Christ. Mr. Breeden's family will be receiving friends from 2:30 p.m. - 5:00 p.m. on Sunday, November 18, 2018, at the Family Life Center of Rockwall and Brin Church of Christ.

The family of K.L. Breeden Jr. created this Life Tributes page to make it easy to share your memories.

Send flowers to the Breeden family.