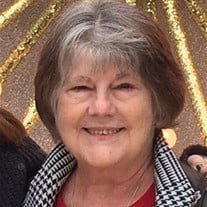 Karen Samples, of Elmo, passed away peacefully April 4, 2019 with her family at her side. She was born Jan. 22, 1942 in Dallas, Texas to Neal and Elizabeth Lyons, both of whom preceded her in death along with her husband, David Samples. Karen grew up in East Dallas and attended Bryan Adams High School. She moved to Terrell in the late 1970s and was an entrepreneur with her wonderful personality and mind for business. She first owned and opened a t-shirt shop in Terrell in 1978 and then owned and operated a One Hour Photo business. Karen was way ahead of the current craft craze when she also opened and ran a ceramic craft store along with the photo business enabling her to meet and charm many residents and customers. Later, she opened a Trophy Shop in Wills Point where she again immersed herself in serving in many civic organizations such as Chairperson for Wills Point Bluebird Festival (where she was instrumental in making Wills Point known as the Bluebird Capital of Texas), Past President of the Wills Point Chamber of Commerce, Elmo Water Board and Van Zandt County Visions just to name a few. Karen was instrumental in making Wills Point the Bluebird capital of Texas. She was a member of Russell United Methodist Church and she had a soft heart for all animals, especially her own pets and her donkeys. Karen always enjoyed crafting, with embroidery being her favorite, but the time she treasured most was time spent with her beloved grandchildren and great grandchildren. A fun loving, smart and beautiful woman inside and out, Karen will be missed dearly by all who knew her. Karen leaves to cherish her memory her children: John Hall of Dallas, Debi Manson and husband, Don, of Garland, Greg Hall and wife, Roxanne, of Dallas, Nancy Crow and husband, Terry, of Kaufman; seven grandchildren: Marcus Allen, Jennifer Allen, Kristy Hall, Jonathan Hall, Neal Crow, Carl Crow and Teri Lindsey; great grandchildren: Antonio, Kennedy, Theo, Callum, Colby, Raegan, Drake, Legend, and Reese; sister, Nancy Stearns as well as her niece, Laura, and nephews, Don and Billy, extended family and a host of friends. A family graveside service for Karen Samples will be 11am Saturday April 6, 2019 at Restland Memorial Park in Dallas. Memorials in her honor may be made to APS Foundation of America, www.apsfa.org to help with research and a cure for this auto-immune disorder.

Karen Samples, of Elmo, passed away peacefully April 4, 2019 with her family at her side. She was born Jan. 22, 1942 in Dallas, Texas to Neal and Elizabeth Lyons, both of whom preceded her in death along with her husband, David Samples. Karen... View Obituary & Service Information

The family of Karen Samples created this Life Tributes page to make it easy to share your memories.

Customized sympathy cards. Mailed for you.