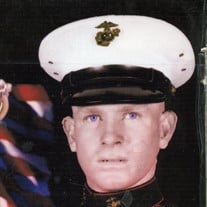 Gunnery Sergeant Kenneth Ray Simpson, USMC (Ret.), passed away November 13, 2020 at the Dallas VA Medical Center. He was born May 23, 1942 to Hose Lee and Mary (Goodson) Simpson in Dallas, Texas. On August 1, 1979, and after 20 years of honorable and faithful service in the US Marine Corps, Gunnery Sgt. Simpson was transferred to the Fleet Marine Corps Reserve where he continued to serve with honor and distinction for another 10 years ending in his full retirement on August 1, 1989. During his commendable service with the USMC, Gunnery Sgt. Simpson was awarded several decorations and medals including: Combat Action Ribbon, Navy Unity Commendation, 5 Good Conduct Medals, the National Defense Service Medal, the Vietnam Service Medal with 3 stars, and the Vietnam Cross of Gallantry with the palm. After retiring from the Marine Corps, Kenneth went to work for Dallas ISD for several years after which he began working with the United States Postal Service. Kenneth always wanted to keep busy and he found joy when he was able to work with his hands repairing or creating anything, tinkering in the garage, or mowing the neighborhood lawns. He always cared for others and would help anyone in need and everyone knew that when you found Kenneth, you found him helping others. A man of impeccable integrity and loyalty, Gunnery Sgt. Simpson will be greatly missed by all who knew him and, most especially, by those who loved him. He is preceded in death by his parents, his daughter, Tracy Kline; his sons, Jesse Elliott and Charles ‘Butch’ Simpson; sister, Mary Ann Mustered and a granddaughter, Toni Hardy. Kenneth leaves to cherish his memories of love and generosity to his beloved wife of 27 years, Freida Simpson; daughter, Kelly Lewis; son, Dennis Elliott and wife Tami; grandchildren: Jennifer Kline, Cortney Elliott, Kody Lewis, Branden Lewis, Draven Lewis, Cody Roberts, Chris Roberts, Stephanie Bice, Zach Kline, Tristan Clark, Kendell Clark and Kalii Linder; 16 great grandchildren: brother, Henry Simpson and wife Nancy; sisters: Shirley Taylor and Debbie Aynes as well as several extended family members and a host of friends. In lieu of flowers and at the personal request of Kenneth, his family asks that everyone purchase a gift for someone you love or spend time doing something with the ones you love so to make the memories that will be cherished forever. Graveside services for Kenneth Ray Simpson will be 1:00 pm Wednesday November 25, 2020 at DFW National Cemetery with full military honors presented. Family will receive friends Tuesday November 24, 2020 from 5:00 pm to 7:00 pm at Max Slayton Funerals and Cremations.

Gunnery Sergeant Kenneth Ray Simpson, USMC (Ret.), passed away November 13, 2020 at the Dallas VA Medical Center. He was born May 23, 1942 to Hose Lee and Mary (Goodson) Simpson in Dallas, Texas. On August 1, 1979, and after 20 years of honorable... View Obituary & Service Information

The family of GySgt Kenneth Ray Simpson USMC (Ret.) created this Life Tributes page to make it easy to share your memories.