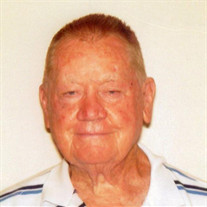 Larry Wayne Day passed away January 6, 2020. He was born April 23, 1934, in Terrell to the late Jesse Jerrell and Lillie Mae Williams Day, both of whom preceded him in death along with his wife, Billie Chapman Day and sister, Nancy Sweetin. Larry was well known in his high school years for his football skills and versatility having played under Coach Leon Vineyard here at Terrell High School. He won all district in 1951 at for both offensive AND defensive positions, a feat that was unheard of in most, if not all, school districts. His All District honors included defensive tackle and offensive guard and State honorable mention for Defensive Tackle and Offensive Guard, and it was said that Coach Vineyard continued to show films of Larry’s on-field performance to incoming athletes giving a visible example of how to successfully play football. Larry received an athletic scholarship in football to Paris Jr. College where, during his second year, he received an unfortunate and career ending injury. He then enlisted in the U.S. Army and after his discharge he went into law enforcement. He began his career in Paris and, later, attained the rank of Sergeant with the Carrollton Police Dept as well as a K-9 officer. After retiring from Carrollton PD, Larry became head of security for Sanger Harris Dept. Stores where his easy smile and helpful nature endeared him to the retail associates and the customers. In his spare time, he enjoyed fishing and riding motorcycles and just being outside. He and his wife, Billie, had a love for dogs and cats and together they cared for many beloved pets and strays that came into their lives. A big man, not only in stature but in heart also, Larry will be missed by his loving family and many friends. Larry is survived by his brother, Jerrell Day and wife, Nadine Harwell Day, of Terrell; nephew, Jesse Day and wife, Janna, of Lubbock; nieces: Janie Gatlin and husband, Mike, of Wills Point, Carolyn Sweetin and Debra Sanders of Dallas; special uncle, James Williams and wife, Jean, of Atlanta, Ga., as well as other extended family and many friends who loved him dearly. A Celebration of Life for Larry will be held at 12:00pm, February 7, 2020 at Max Slayton Funeral Chapel with the family receiving friends beginning at 11:00am to service time. Inurnment will follow at D/FW National Cemetery at 2:30pm, Friday, Feb. 7, 2020.

Larry Wayne Day passed away January 6, 2020. He was born April 23, 1934, in Terrell to the late Jesse Jerrell and Lillie Mae Williams Day, both of whom preceded him in death along with his wife, Billie Chapman Day and sister, Nancy Sweetin. Larry... View Obituary & Service Information

The family of Larry Day created this Life Tributes page to make it easy to share your memories.

Send flowers to the Day family.