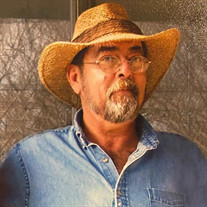 Larry Gene Langley, of Terrell, passed away peacefully on the morning on July 14, 2020 with his beloved family at his side. Larry was born October 12, 1953 in Harlingen, TX to Howard and Hortencia (Chavez) Langley. He was met in Heaven by his father, his sister, Patsy Hurst and his great grandson, Colson Lane. Larry married the love of his life, Dieann Turner, on March 4, 1972 and together they raised two beautiful daughters, Dieanna and Sissy. Larry had a generous heart and his behind the scenes generosity to others was well known to many in the county. He worked in construction laying the foundations for business and homes for so many as well as providing roadways. His success was based entirely on the honesty and the integrity that Larry had as he served others and there were many general contractors and project manager that would wait as long as it took to secure Larry’s expertise. They all knew when Larry took care of the job, the job would be done right. In 2013, Larry was instrumental in laying the ground floor and roadway for Fellowship Church where he donated his time and resources at no charge. He and Dieann were inseparable and their love for others was exceeded only by their love for each other. He was a devoted husband, father and grandfather as well as a wonderful provider. His family knew, each and every day, that he loved them and was proud of each of them. A man of few words but of immense acts of kindness and big-heartedness, Larry will be missed by all who knew him. Larry is survived by his beloved wife, Dieann Langley; daughters: Dieanna Fuller and husband, Derek, Sissy Himes and husband, T.J.; grandchildren: Jarrod Lane, Brittni Brown, John Brown and Logan Womble; great grandchildren: Maci Finley, Landon Finley, Izaiah Brown, Ryder Lane and Nevaeh Atchley; mother, Hortencia Hargrove and husband, Billy; siblings: Harold Langley and Charlene Pinkerton and husband, Sam as well as numerous other extended family members and a host of friends near and far, all of whose lives Larry touched. Funeral service for Larry will be 10 a.m. Thursday, July 16, 2020 at Max Slayton Funeral Chapel. There will be an interment to follow at Oakland Memorial Park in Terrell. Larry's family will receive friends 5 p.m. to 7 p.m., Wednesday, July 15, 2020 at Max Slayton Funeral Chapel.

Larry Gene Langley, of Terrell, passed away peacefully on the morning on July 14, 2020 with his beloved family at his side. Larry was born October 12, 1953 in Harlingen, TX to Howard and Hortencia (Chavez) Langley. He was met in Heaven by... View Obituary & Service Information

The family of Larry Langley created this Life Tributes page to make it easy to share your memories.

Larry Gene Langley, of Terrell, passed away peacefully on the...

Send flowers to the Langley family.