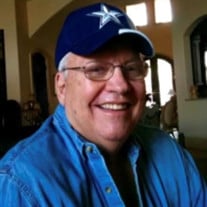 Larry James Raines July 11, 1940 – December 31, 2021 Larry James Raines, (Age 81) of Rockwall and formerly of Terrell, passed away on December 31, 2021, from heart complications at his home. Larry was born on July 11. 1940, in Camilla, Georgia. He was the youngest son of Glenn Raines, Sr. and Ruth Spradley Raines. Larry attended Terrell Public Schools from 1946 to 1958. He was an outstanding football player, who played offense and defense, for the Terrell Tigers. Larry was an All-State Guard his senior year; Terrell won the AA State Championship that year. The Terrell Tribune once reported that Larry was one of the most complete football linemen the Tigers ever had. In 1958 he attended Rice University on a football scholarship and later attended East Texas State University, also on a football scholarship, and graduated with a Bachelor of Science degree in Health and Physical education. In 1960 he married his high school sweetheart, Shirley Hunter. Following his college graduation, they moved to Dallas where he coached football for T.W. Browne Jr. High School for several years. Later Larry changed careers and became a pharmaceutical sales representative for the remainder of his career. He retired in 2002. In 2001 he was inducted into the Terrell Football Hall of Fame. Larry took great pride in receiving this honor. He was an avid football fan his entire life. He particularly loved watching the Dallas Cowboys play. But most of all he loved reliving Terrell’s glory years of winning football games with his friends. Larry always felt that there was never a better football coach than Coach Leon Vineyard, and he gave him much credit for achieving his goals with the game of football. Larry always credited his years of playing football for establishing his strong personal ethics. Larry was a kind fun-loving man who so enjoyed laughing and making people laugh. He was truly loved by everyone! Larry enjoyed and adored his children and grandchildren and spent a lot of time with them. He will be greatly missed by his family and friends. Larry is preceded in death by his parents, his brothers Glenn Raines, Jr. and Pat Raines, and his sister Patsy Raines Lewis. He is survived by his son Larry James Raines, Jr (Chuck), his daughter Holly Edwards, his grandchildren, Alexandria Edwards and Nicole Raines, and his former wife and lifelong friend Shirley Hunter Raines, all of Dallas, Texas. A memorial service will be held at 2:00pm on Saturday, January 22, 2022, at Max Slayton Funeral Chapel, with a reception to follow. The family will be receiving friends beginning at 1:00pm, leading up to service time.In lieu of flowers, the family is requesting donations be made to Larry's church: Lone Star Cowboy Church in Nevada, TX at https://lsccnevada.net and selecting the "Giving" tab.

The family of Larry Raines created this Life Tributes page to make it easy to share your memories.

Send flowers to the Raines family.