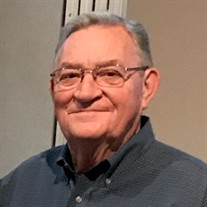 Larry Eugene Woodall, lifetime resident of Terrell, passed away into the presence of his Savior with his family by his side on August 19, 2020. Larry was born January 23, 1946 in Terrell to Eugene Debs and Beulah Blanche Vick Woodall, both of whom preceded him in death along with his sisters: Charlotte Lawrence and her husband, Raymond and Myrna Lawson and her husband, Grady. Larry attended THS after which he enlisted in the US Marine Corps from 1960 to 1966 where he served with honor and distinction in two tours during the Vietnam War and also stationed on a battleship during the Cuban Missile Crisis. After his honorable discharge, Larry returned home and married the love of his life and his soulmate, Rita Ann Baker, on August 25, 1967 at Grace Temple Baptist Church. He worked for Braden’s Automotive for many years before becoming employed with Teaster’s Automotive where his talent and knowledge of the right parts for the right engines made him a valuable asset to the places he worked as well as to the community. Larry and Rita were members of First Baptist Church in Terrell where their friendly smiles were welcome at every worship service. He was a devoted husband, loving father and dedicated grandfather and Larry’s grandchildren were the lights of his life. He enjoyed fishing and golf and time spent with his family was Larry’s favorite way to spend his days. A man of great character and integrity, he will be greatly missed by all who knew him. Larry is survived by his wife of almost 53 years, Rita Woodall of Terrell; daughter, Stacey Leigh and husband, Jon, of Forney, Raymond Woodall and wife, Blaire of Austin, Matt Woodall and wife, Jennifer, of Terrell; grandchildren: Lauren Wicker and husband, Jordan, Garrett Woodall, Lindsey Leigh, Maddie Woodall and Macie Woodall; sister, Juanda Woodall of Arlington as well as several nieces, nephews, extended family and a host of friends. A celebration of Larry’s life will be at 11:00am, Saturday, August 22, 2020 at First Baptist Church in Terrell with interment to follow at College Mound Cemetery at a later date. The family will receive friends 5:00pm to 7:00pm, Friday, August, 21, 2020 at Max Slayton Funeral Chapel. In lieu of flowers, the family asks that memorials in honor of Larry be made to First Baptist Church, 403 N. Catherine, Terrell, 75160.

Larry Eugene Woodall, lifetime resident of Terrell, passed away into the presence of his Savior with his family by his side on August 19, 2020. Larry was born January 23, 1946 in Terrell to Eugene Debs and Beulah Blanche Vick Woodall, both... View Obituary & Service Information

The family of Larry Woodall created this Life Tributes page to make it easy to share your memories.

Send flowers to the Woodall family.