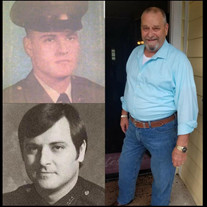 Lee Barton Strickland was born on July 30, 1948 and went home to our Heavenly Father on August 24, 2020. Lee was born in Greenville TX and raised in Tahoka TX on a dry cotton farm and then Lamesa TX. Lee graduated from Lamesa High School and then served our country that he loved so much, with the US Army achieving the rank of SP5 (Sargent). He was deployed to Vietnam from 1966-1968. He was Honorably discharged from the US Army after being recruited by the Dallas Police Department. He served the citizens of Dallas from 1968-1983. He also served from 1968-1972 in the Army Reserves. Lee retired in December of 2019 from the State of Texas where he worked as an officer for Terrell State Hospital in Terrell TX. While in Vietnam and with DPD, Lee studied for his college degrees. He received his Associate of Arts degree from Abilene Christian University and his Bachelor of Science degree from Sam Houston State University. During his time with the US Army, Lee received the following awards. GCM Good Conduct Medal, ARCOM, Vietnam Service Medal RVFCM W/60 Device, VSM Vietnam Service Medal, NDSM National Defense Service Medal, Overseas Service Bar & The Army Commendation Medal. During his time with DPD, he proudly served at the Northeast Station as a Patrolman, Sargent, and Lieutenant; Old City Jail Sargent and Lieutenant; Old City Hall Legal Liaison Lieutenant to Chief Billy D. Prince. Lee completed the Terrorism Program, School of Police Supervision, Field Training Officer Course, 18th Command and Management School, Contemporary Issues in Police Administration, & General Police Science. He was awarded Expert Marksmanship Award, Texas Commission on Law Enforcement Officer Standards and Education Advanced Certificate. During his time with Terrell State Hospital, he received a Dedicated Service Award for over 10 years of service and was the Finalist for the You Be The Change Award. In January 2019, Lee was accepted into The American Legion. Lee was a member of the Rockwall & Brin Church of Christ in Terrell TX. Lee was previously a member at Prestoncrest Church of Christ in Dallas TX where he also served in the Prison Ministry for death row inmates in Huntsville TX. He loved spreading the Word of God and his favorite verse was Romans 8:28. He loved spending time with his family & friends, especially with the love of his life, his fiery redhead of 44 years. He loved gardening, traveling, fishing, working on his land, storytelling, writing, riding motorcycles, CCR and Roger Williams’ music, playing guitar and making sure all who were around him were laughing and having fun. Lee always gave sound advice and was the life of every gathering. He never met a stranger. Lee is survived by his wife, Tressie Ellen Strickland of Terrell TX. His daughters, Tressie Lee-Ann Strickland Nichols & husband Robert of Groves TX & Leslee Paige Strickland Berry & husband Andy of Shreveport LA. Grandchildren are Zane Nichols of Groves TX, Autrey Nichols of Groves TX, Abigail Poovey of Groves TX, Harrison Berry of Shreveport LA, Maverick Nichols of Groves TX & Tressie Kaylani Nichols of Groves TX. Mother-In-Law, Tressie Shiflet of Groves TX. Sister-In-Law, Billie Strickland Reynolds of Brownfield TX. Niece, LaNita Huth of Las Vegas NV, Nephew, Randy Strickland of Seminole OK, Niece, Tara Shiflet of Groves TX and Nephew, Troy Shiflet of Groves TX and many other nieces, nephews and cousins. Lee loved so selflessly that he “adopted” a few of his daughter’s friends & later their children, as his own. He is also survived by Stacey Vargas Milligan & daughter, Cheyenne, Brian & Kim Terry, Emily Parker Holmes, Kimberly Petre Pike, Chrissy Bryson, Chrystal Hafertepe, Slate Lemieux, Marcey Seebaran, Mark Seebaran, Marlon Seebaran Jesus & Lulu Jurado & children, William, Stephanie & Max and many more we may not even know. Lee is also survived by many of his dear & closest friends that he considered family. Lee is preceded in death by his parents, Clarence Newton Strickland & Ruth Ann Strickland. Sisters, Tula Fern Roberts & Dorothy Jane Strickland & Brothers, Welby Reid Parish, Horace Owen Strickland & Victor Lynn Strickland, Father-In-Law, Ralph Shiflet, Brother-In-Law, Autrey Shiflet, “Adopted” by love son, Ryan Wilson, and many other extended family members. Dear and close friends, Jim Brown, Larry Zimmerman, Phyllis Parker, Dan Kelly & close friend and Blue Brother from DPD, John T. McCarthy and many other Military & Blue Brothers. On behalf of Lee’s family, we send a heartfelt Thank You to Vernon & Barbara Seebaran, David & Cindy Micheau, Norma Brown & Stacey Milligan for being by their side during this time. On Friday, September 11, 2020, The Patriot Guard will be escorting us from Rockwall & Brin Church of Christ, 407 N. Rockwall St., Terrell TX at 9:00 AM to the DFW National Veterans Cemetery, service is at 11:00 AM. Words of remembrance will be provided by Randy Strickland, Vernon Seebaran & Tressie Nichols, prayer by Scott Dagen. All motorcycle riders who would like to join us &/or ride with the procession are welcome. Riders will ride behind The Patriot Guard. Please be at the church no later than 9:00 AM. In lieu of flowers, and on behalf of Lee, our family requests donations to Dallas TX Ronald McDonald House or St. Jude Children's Research Hospital. “Therefore, since Christ suffered for us in the flesh, arm yourselves also with the same mind, for he who has suffered in the flesh has ceased from sin.” 1 Peter 4:1 KJV

Lee Barton Strickland was born on July 30, 1948 and went home to our Heavenly Father on August 24, 2020. Lee was born in Greenville TX and raised in Tahoka TX on a dry cotton farm and then Lamesa TX. Lee graduated from Lamesa High School and... View Obituary & Service Information

The family of Lee Strickland created this Life Tributes page to make it easy to share your memories.

Send flowers to the Strickland family.