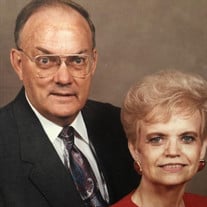 Lettie B. Perry was born on January 9, 1935. She was preceded in death by her parents Archie and Beulah Owings and an infant son buried in North Dakota. She is survived by her husband, Donald Casey Perry of Malakoff, her son Randy and his wife Brenda of Malakoff, son, Donny and his wife Sandy of Columbus, IN, daughter Dixie and her husband Gerald of Arlington, TX and son, Eddy and his wife Jill of Lynnville, TN and a special chosen son, Dr. Bob Sperry and his wife Lynne of Tyler, TX. She is also survived by eleven grandchildren, eight great grandchildren and two chosen special grandchildren. Lettie B. Perry graduated from Brownwood High School in 1953 and attended Howard Payne University. She was involved in the Life Service Band which was a college evangelistic ministry. She married Donald Casey Perry on October 22, 1955 and served with him in his ministry for over 65 years. She also worked at Mobil Oil in Dallas, Terrell State Hospital and Pickens, Snodgrass and Koch CPA firm in Arlington, TX. At a young age, Lettie began studying music and became an accomplished pianist and organist. She used her God given talents at many events for the Southern Baptist of Texas Convention (SBTC), evangelism conferences and senior adult camps. Lettie served on many committees including the search committee of the SBTC, who appointed Dr. Jim Richards, as the President. She was also involved in home mission outreach and served along beside her husband, Casey, in their ministries together. She started hand bell choirs at Hillcrest Park Baptist Church in Arlington, Texas and First Baptist Church in Malakoff. She also started an adult, youth and children’s handbell choirs at FBC, Malakoff as well as a ladies ensemble group called, Sweet Assurance and was a member of Faith Community Church in Mabank. She loved her Lord, her husband, children, grandchildren, great-grandchildren dearly and will be missed by all until we are one day reunited in the presence of the Lord. Family will receive friends from 4:00 pm to 7:00 pm, Tuesday, April 28, 2020, at Max Slayton Funerals and Cremations. Family will also receive friends from 4:00pm to 7:00 pm, Wednesday, April 29, at the First Baptist Church of Malakoff. Due current guidelines set forth by Kaufman County and the State of Texas, the funeral home requests that all attendees limit their visit to 10 minutes so as to allow others to have the opportunity to offer condolences to Lettie's family. To assist with time management, the funeral home staff will monitor and observe the state mandated guideline of a limit of 10 people at one time at both the funeral home and the church. Graveside service will be 11:00 am, Thursday, April 30, 2020, at Eastlawn Memorial Park in Early, Texas. In lieu of flowers, the family requests memorials be made to the Alzheimer's Association at www.alz.org or www.burstingbarnsministries.com, a ministry to missionaries.

Lettie B. Perry was born on January 9, 1935. She was preceded in death by her parents Archie and Beulah Owings and an infant son buried in North Dakota. She is survived by her husband, Donald Casey Perry of Malakoff, her son Randy and his... View Obituary & Service Information

The family of Lettie B. Perry created this Life Tributes page to make it easy to share your memories.

Send flowers to the Perry family.