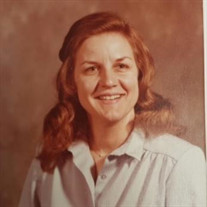 Elda Lois Butler (Woytek) October 9, 1947 – March 11, 2017 Born in Pasadena, Texas to Elden Helmuth Woytek and Beulah Marie Commander Woytek, (Sue) where she graduated High School in 1965. She moved to Dallas, TX shortly after graduation to attend Dallas Baptist University. It was there that Cathy Butler introduced her to William Earl Butler; they were married on March 18, 1967 and moved to McAlester, OK, where William was stationed at the McAlester Naval Ammunition Depot. After William separated from the military, he attended Preston Road School of Preaching, and while in school, Lois typed all of this school notes. As a result of her tireless assistance in note typing, Lois became a Biblical Scholar in her own right, faithfully ministering alongside her husband feeding the hungry with the humility of a servant of our Lord. Lois was a very smart woman who helped Bob Whitt make his Air Conditioning service into a very successful business. She then worked at Terrell State Hospital in the Client Rights Department. While there, she became acquainted with abuse, neglect and exploitation of clients all of whom found a trusted advocate in Lois. After working for the state for several years as an investigator, her job was moved to another state agency where she continued to investigate cases of abuse, neglect and the exploitation until her retirement. She was a staunch defender of the downtrodden; she worked hard to ferret out the truth for either staff or patient. A hostess to all her neighbors, a friend to every dog she ever met, even a few cats, she baked bread for them and was always available with a listening ear and a word of wise counsel. Even though she was kind to everyone she ever met, above all else Lois cherished her family: her beloved husband, William, her children, Andrew and Amy, plus several foster children she took to her heart through the years, as well as her beautiful grandchildren: Amelia, Brittany, Anna, Andrew, Marcus and Christopher. Lois is survived by her loving Husband of almost 50 years, William Butler; her daughter, Amy Christine Barber and husband Christopher Dale Barber; Grandchildren: Amelia Catherine Owsley and husband David, Brittany Barber, Anna Palin and her husband Jay, Christa Ann Butler, Andrew Jacob Gardner, Christopher Edward Barber and Marcus Christian Davis as well as her Great – Grandsons: (Joseph) Jude Palin and Lincoln William Palin. Lois was welcomed into Heaven by her son, William Andrew Butler, parents, Beulah Marie (Commander) and Elden Helmuth Woytek, parents-in-law, Edna Earl and William Wayne Butler and, of course, her Lord and Savior who, we know, said the words, “Well done, my good and faithful servant”. Funeral service will be 11:00am, Wednesday, March 15, 2017 at Colquitt Road Church of Christ with interment to follow at Oakland Memorial Park. The family will receive friends 6-8pm, Tuesday, March 14, 2017 at Max Slayton Funerals and Cremations. In lieu of flowers, and to honor Lois’ servant’s heart, memorials may be made to the Medina Children’s Home, 21300 TX-16, Medina, TX, 78055.

The family of Lois Butler created this Life Tributes page to make it easy to share your memories.

Send flowers to the Butler family.