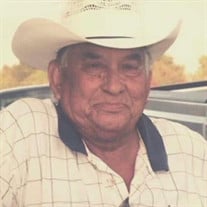 Lorenzo Cruz entered into eternal rest on Tuesday, May 24, 2022 at the age of 89 years old surrounded by his family. Lorenzo was born to Policarpio Cruz, Sr. and Paula Sanchez on September 4, 1932 in La Gruella, Texas, he was the youngest of 6 siblings. He is preceded in death by his parents, Policarpio Cruz and Paula Sanchez; siblings: Ruperto (Beto) Sr. and wife Josephina Cruz, Policarpio Cruz, Jr., Hortensia Cruz, Consuelo Maria Fuentes-Cochran and husband Alejandro M. Fuentes; sons: Jose Alfredo Cruz, Riley Cruz, and Lorenzo Cruz, Jr.; grandson, Brian Allen Cruz; son-in-law, Albert Gallegos, Sr.; nephews: Frank, Raymond Fuentes and Alex Fuentes and brothers-in-law: Alex Fuentes and Joe (Pepe) Solis, Sr. Mr. Cruz did not know, or ever meet, a stranger. He was such a fun and loving soul and the laughter and smiles he showed to everyone will truly be missed. He lived life to the fullest and enjoyed listening to country music and his all-time favorite Norteno music. The countless weekends spending time with his family were all very special to him. His children would say he was an animal whisperer. He will forever be missed and his memories will carry on within each one of his loved ones. He was raised around farming most of his life where his love of ranching and working the land and livestock became the foundation of his life. He met his former wife, San Juana (Juanita) Salazar in Scurry-Rosser, Texas in the cotton fields on the Benson Farms and they were married in Kaufman, Texas on September 22, 1956. Lorenzo managed the farm for the Double II Ranch owned by Charles Rawley Ice (C.R. Charley) where he and Juanita raised their 12 children from the early 1960’s to mid-1970’s. Mr. Cruz then worked for Dal-Tile, in Dallas, Texas in the late 1970’s and Falcon Steel in Kaufman, Texas in the late 1980’s while settling down as a full-time retired farmer. He is survived by his brother, Valentine Cruz of McAllen, Texas; sister, Maria Esperansa Solis of Rockwall, Texas; sisters-in-law, Virginia Cruz of McAllen, Texas and Andrea Cruz of Tawakoni, Texas; his children: Herman Cruz; Janie Valdez and husband, George; Mary Esquivel and husband, Epifanio; Rudy Cruz and wife, Robin; Joe Cruz and wife, Linda; Teresa Gallegos, Elida Herrera and husband, Martin; Aurora Aguilar and husband, Robert Sr.; Carolyn Gomez and husband, Juan; Florena Carrillo and husband, Arthur; Dora Orozco and husband, Martin ; Anita Cruz and husband, Jose Salazar; 34 grandkids and 44 great-grandkids along with a host of extended family and friends. A Mass of Christian Burial will be at 10:00am, Friday, May 27, 2022 at St. Ann Catholic Church with interment to follow at Kaufman Cemetery. The family will receive friends 5:00pm to 7:00pm, Thursday, May 26, at Max Slayton Funeral Chapel. Pallbearers will be: Mike Cruz, Roy Cruz, Jimmy Fuentes, Andrew Cerda, Daniel Cruz, Beto Cruz Honorary Pallbearers will be: Robert Aguilar Sr., Arthur Carrillo, Epifanio Esquivel, Juan Gomez, Martin Herrera, Martin Orozco, Jose Salazar, Robert Jesus Aguilar, Jr., Jordan Cruz, Albert Gallegos, Jr., Martin Gallegos, Alex Herrera and Tomas Luevanos.

Lorenzo Cruz entered into eternal rest on Tuesday, May 24, 2022 at the age of 89 years old surrounded by his family. Lorenzo was born to Policarpio Cruz, Sr. and Paula Sanchez on September 4, 1932 in La Gruella, Texas, he was the youngest... View Obituary & Service Information

The family of Lorenzo Cruz created this Life Tributes page to make it easy to share your memories.

Send flowers to the Cruz family.