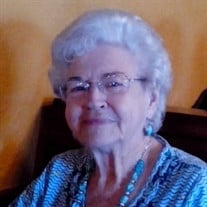 Lou Hunter, of Terrell, passed away peacefully into the presence of her Savior on the morning of November 4, 2018. Lou was born August 11, 1927 in Upshur County, TX to Carl Lee and Effie Della (James) Chaffin. She was reunited in Heaven with her husband, Richard Hunter, Jr., daughter, Susan Hunter; her parents, sisters: LeeDell Pepper, Bonnie Henry; and brothers: Milton, Sam and Neil Dean Chaffin. Lou grew up in rural Upshur county and she was one of the first graduating classes from Harmony High School. She met and married the love of her life, Richard Hunter, and they made their home in Dallas before moving to Terrell in 1969. She worked for Zales Jewelry and then for American National Life Insurance until her retirement. Lou was a devoted wife and mother with a strong desire to serve the Lord. She and Richard were actively involved at First Missionary Baptist church where their kindness to others was very well known. Later, they became members of First Baptist Church of Terrell where she continued to help others hear and read about the Gospel through her work with the Gideon Auxiliary as she partnered alongside Richard’s Gideon presentations. Lou’s love for helping others was also evident with her memberships in Terrell Pilot Club, Meals on Wheels and 55Alive, where she provided instruction on driving refresher courses. Her ability to embody true Southern hospitality with her welcoming smile and great cooking confirmed Lou’s generous personality and helpful spirit and she will be missed greatly by all who knew her. Lou is survived by her children: Cindy Bauer and husband, Darold, of Coppell, Richard T. Hunter, III and wife, Ellen, of New Braunfels, and Jane Ann Goolsbee and husband, James, of Arlington; grandchildren: Christy Bagley and husband, Tres, Richard Hunter, IV and wife, Nichole, Austin Bauer and wife, Chayne, Stephen Hunter and wife, Stacey, Zach Goolsbee and wife, Katherine, Tracy Warrick and husband, Gary, and Tessa Wilkins and husband, Josh; great grandchildren: Hannah, Emma, Robby, Norah, Morgan, Nolan, Sebastian, Hunter, Giovanni, Jocelyn Lou, Emi, and Evelyn; sister-in-law, Geneva Chaffin; sister in Christ, Courtney Warren as well as numerous nieces, nephews, extended family, church family and a host of friends. Funeral service will be held at 1:00pm, Thursday, November 8, 2018 at Max Slayton Funeral Chapel. Interment will be at 11:00am, Friday, November 9, 2018 at D/FW National Cemetery where she will be laid to rest with her beloved husband. The family will receive friends 5-7pm, Wednesday, Nov. 7, at the funeral home. In honor of Lou, her family respectfully asks that floral tributes be reconsidered and, instead, contributions be made to the Gideons International at www.gideons.org, the Kidney foundation at www.kidney.org or to the Alzheimer’s Foundation at www.alz.org.

Lou Hunter, of Terrell, passed away peacefully into the presence of her Savior on the morning of November 4, 2018. Lou was born August 11, 1927 in Upshur County, TX to Carl Lee and Effie Della (James) Chaffin. She was reunited in Heaven with... View Obituary & Service Information

The family of Lou Hunter created this Life Tributes page to make it easy to share your memories.

Lou Hunter, of Terrell, passed away peacefully into the presence...

Send flowers to the Hunter family.