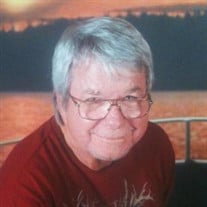 Lowrie “Mr.” Sanders, longtime and beloved resident of Terrell, passed away July 3, 2021 at his home. Lowrie was born Thomas Lowrie Sanders on Sept. 6, 1943 in Terrell, TX to William Modean and Helen Louise (Lowrie) Sanders, both of whom were there to meet him in Heaven. Being born and raised in Terrell afforded Lowrie the chance to see the many changes that the city, and Kaufman County, went through over the years. He graduated from Terrell High School in 1964 after which he proudly served in the US Army National Guard. During his enlistment, he was a Certified Dog Trainer for Military Operations at the Nike Missile Base. On June 28, 1967, he married his best friend and the woman who would always support him, Doris Patton. They were inseparable and together they raised three children, who love their parents. Lowrie always had a heart for others and his service in law enforcement spanned over 50 years beginning with his employment with Terrell, Kaufman and Kemp Police Departments. Lowrie was most known, and recognized, for being the Constable in Precincts 2 and 3. He filled the position after his father’s devoted service as Constable and Lowrie was subsequently, and consistently, elected by the public for 40 years. His faithfulness to the badge, and all it symbolized, continued to set the high standard started by his dad. His dedication to this elected position was well known-not only in Kaufman County but in the surrounding counties as well. Lowrie was the “go to” for both civilians and other law enforcement agencies because of his wealth of knowledge of the law AND the citizens he served so well. As one resident said of Lowrie, “Lowrie was one of the good guys. A mentor and friend to everyone…except the bad guys!” Some of the residents of Terrell also remember Lowrie driving a school bus, once again, proving Lowrie’s heart for keeping others safe-including the future of Terrell as they rode to school to learn and grow in his beloved hometown. In his free time, he loved to fish with friends and family as well as to cook his signature BBQ and Chili recipes. After his well-deserved retirement, he enjoyed quiet evenings with Doris, his loved ones and friends and his beloved dog, Jazzy. His wit and wisdom were treasured by all who had the chance to visit and spend time with Lowrie and he will be greatly missed by everyone whose life he touched. Lowrie leaves his legacy to be cherished by his wife, Doris Sanders of Terrell; daughters: Angie Humphries and husband, James Russell, of Ben Wheeler, Tammy Womack and husband, Chris, of Terrell; son, Casey Sanders and wife, Tabitha, of Terrell; grandchildren: Miranda Womack, Sydney Womack, Russell Humphries, Breanna Sanders and Charli Jo Sanders; sister, Janey Borne; brother, William “Gopher” Sanders as well as numerous nieces, nephews, extended family, and a host of many friends made during his lifetime of service to the community and the county. Funeral service will be 1:00 p.m. Wednesday July 7, 2021 at Life Pointe Church 1600 Griffith Ave. Terrell, Tx 75160 with interment to follow at Chisholm Cemetery. Family will receive friends Tuesday July 6, 2021 from 6:00 p.m. to 8:00 p.m. at Max Slayton Funerals and Cremations.

The family of Lowrie "Mr." Sanders created this Life Tributes page to make it easy to share your memories.

Send flowers to the Sanders family.