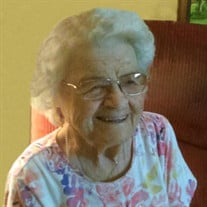 Mabel Furey Stoltz, of Portales, NM, passed away at her home on February 27, 2020 after a life of more than 100 years. She was born in Paris, Texas on January 20, 1920 at home to John M. and Bess L. Furey. Mabel was met in Heaven by her parents, her sisters: Bess Gray, Catherine Furey; husband, Jack Stoltz; daughter, Suzanne Berends and son-in-law, John Murray. Mabel was a resident of Terrell for over 30 years after which she moved to Athens. On February 14, 1941, she married the love of her life, Jack U. Stoltz and they were together for 55 years until Mr. Stoltz’s passing in 1996. Together, Mabel and Jack lovingly raised four children: Suzanne, Mary, Jack and Melinda and filled their lives with a foundation of love and fun memories. Mabel had a love for reading and learning new things every day and she served as a librarian and a school secretary in the several towns in which she and the family lived. For the last eleven years, she has resided with her daughter, Mary Murray, in Portales, NM where her wonderful personality enabled her to make many new friends. Mabel is survived by her daughter, Mary Murray, whom she called Mary Margaret. Also surviving are her son, Jack Stoltz of Farmington, NM; daughter, Melinda Holcomb and husband, Randall, of Ft. Worth, TX as well as grandchildren: Maria Sylvia of Mont Belvue, TX, Allen Miller also of Mont Belvue, TX, Liz Reece of Portales, NM, Karen Lemieux of Annandale, VA, Joshua Murray of NJ, Skye Murray of NJ, Jason Stoltz of Phoenix, AZ, Brandon Kirby of Point, TX, and Clint Kirby of Garland, TX; 20 great grandchildren; 1 great-great grandchild and several other nieces, nephews, extended family and a host of friends near and far. A funeral service will be held at 2:00pm, Tuesday, March 3, 2020, at Max Slayton Funeral Chapel in Terrell, Texas with interment to follow at Oakland Memorial Park, where she will be laid to rest next to her beloved husband, Jack. Family will receive friends at 1:00pm until service time. For those wishing, memorials in Mabel’s honor (and in remembrance of Jack’s tireless research of the history of Terrell and its residents) to the Terrell Heritage Society, c/o Terrell Heritage Museum (Carnegie Museum), 207 N. Frances St., Terrell, TX,

Mabel Furey Stoltz, of Portales, NM, passed away at her home on February 27, 2020 after a life of more than 100 years. She was born in Paris, Texas on January 20, 1920 at home to John M. and Bess L. Furey. Mabel was met in Heaven by her parents,... View Obituary & Service Information

The family of Mabel Furey Stoltz created this Life Tributes page to make it easy to share your memories.

Mabel Furey Stoltz, of Portales, NM, passed away at her home...

Send flowers to the Stoltz family.