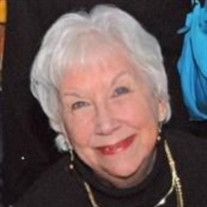 Margaret (Sammon) Yates Miller went home to be with the Lord on Sunday evening, May 23, 2021, at her home in Quitman, Texas. She was born September 14, 1935 to Brady and Florence Sammon, both of whom have preceded her in death, along with her sister, Carol Curtiss, and a brother, John Marvin Sammon. Margaret attended school in Dallas, graduating from Pleasant Grove High School in 1954 as Valedictorian of her class. She married Gerald Yates in July of 1955, and they had two children, Gayle and David. They made their home in Dallas until 1969, when they moved their family to Forney to serve at the First Baptist Church of Forney. She taught the Adult 6 Ladies’ Sunday School class for many years and sang in the choir. Margaret worked as a secretary at Forney Elementary School and then as the secretary to the Fire Chief at the City of Mesquite. In 1980, Margaret began a career in real estate that would last almost 30 years. She and Gerald opened Yates & Associates, REALTORS in Forney in 1984 and added a second location in Terrell in 1989. They were both active in the Kaufman-Van Zandt Association of REALTORS, and Margaret served as President of the association two different times. After Gerald’s death in 1993, Margaret filled his seat on the Board of Directors of the Texas Association of REALTORS for several years and continued to run the company until 2004 when she retired. Margaret married Earl Miller in October of 2007, and they resided in Rockwall until his death in 2018. She lived with her daughter and son-in-law until her death and was eagerly awaiting the birth of a great-granddaughter in September. Margaret is survived by her daughter and son-in-law, Gayle and Pat Fischer, of Quitman; son and daughter-in-law, David and Debbie Yates, of Myrtle Springs; grandchildren, Amy Fischer and David Johnson; Brian and Zasha Fischer; Michelle Sharpe; Kimberly Krone and Ashley Carter; 4 great-grandchildren; several nieces, nephews and cousins, and many friends that will miss her dearly. Funeral service for Margaret will be 11:00 am Wednesday, May 26, 2021 in the chapel of First Baptist Church of Forney with an interment following at Hillcrest Cemetery. Margaret's family will receive friends 6 pm to 8 pm Tuesday, May 25, 2021 in the chapel.

Margaret (Sammon) Yates Miller went home to be with the Lord on Sunday evening, May 23, 2021, at her home in Quitman, Texas. She was born September 14, 1935 to Brady and Florence Sammon, both of whom have preceded her in death, along with her... View Obituary & Service Information

The family of Margaret Yates Miller created this Life Tributes page to make it easy to share your memories.

Margaret (Sammon) Yates Miller went home to be with the Lord...