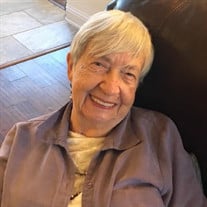 Marian Garnett, beloved wife, mother, grandmother, great grandmother, and friend, passed away on April 24, 2020. She was born April 10, 1931 in Aldershot, England (about 35 miles southwest of London) to William Alexander and Elizabeth Ethel (DeLaHunt) Given, both of whom preceded her in death along with her husband of 62 years, Stanley Garnett, son, Lyndon Garnett and sister, Janet Church and brother-in-law, Ralph Church. At the age of 21, she and her husband, Stan, left England traveling to Canada after which they immigrated to the US. For five years, they traveled having only a suitcase, small tv and their car settling first in California, then Texas, Kentucky and finally returning to Texas to settle. They lived in Irving and then moved to the Rio Grande Valley where they resided in San Benito, then Harlingen, TX from 1980 to 2013. In 2014, Marian moved to Cedar Hill, TX and lived with her daughter Christine and Son-in-law Kenneth Mashburn, where she was a faithful member of Good Shepherd Episcopal Church. She enjoyed reading, shopping, theatre, travelling, and spending time with her family and friends. She was a devoted mother and loving wife and made instant friends with everyone she met. Marian had a wonderful talent for making sure that every day was an adventure to be experienced and shared with those she loved. She took immeasurable joy in the simple things of life and she never took a single day for granted. Marian is survived by her daughters, Joanne Whatley of Garland, TX, and Christine Mashburn and husband, Kenneth, of Cedar Hill, TX; grandchildren: Steven Garnett and wife Jame, Michael Mashburn and wife Andrea, Kyle Mashburn and wife Kaitlyn, Kay Froehlich and husband Matt, Cameron Whatley, Kevin Whatley and Marian Claire Whatley: great grandchildren: Emma & Brycen Garnett, Lincoln & Gavin Taylor, Chase Mashburn, Heidi Arrayata and the expected arrival of Baby Froehlich; nieces and nephews: Steven and Emma Church, Debbie Church and Nigel Tyler, Diane Church-Pratt and Richard Pratt, numerous great nieces and nephews and their families all of whom live in England as well as other extended family members including father of grandchildren, Brett Whatley, mother of grandchildren, Connie McDonald, and fathers of great grandchildren, Justin Taylor and KJ Arrayata and a host of friends who will all miss Marian dearly. A family service is being planned for a later date to celebrate her legacy. A Message from Marian’s family: “As an avid reader herself, Marian and Stan’s lives would make for an interesting and well-loved memoir for their family. We wish that we had collected more of their life stories and the many memories Marian and Stan made with each other and all of us. Please send any stories and memories that you have so that we might pass them down to future generations. And, as Marian would always write and say in her farewells, God Bless…”

The family of Marian Garnett created this Life Tributes page to make it easy to share your memories.

Send flowers to the Garnett family.