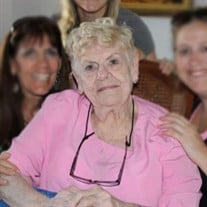 Marie Therese McGulpin Weak Marie (affectionately known as “Toots”) was born on April 13, 1932, on Mackinac Island, Michigan, to Beatrice (Chapman) and John McGulpin. Her maternal grandparents were Edouige (St. John) and James Chapman and her paternal grandparents were Lena (Chapman) and Selew McGulpin, all of whom were original settlers of Mackinac Island. Growing up on the island, she lied about her age, at 13, so she could start working at the restaurants in the summertime. In the winter, she went to school, ice skating, bob sledding and tobogganing and she loved to sing in the church choir. At Christmas time, Marie always remembered the snow being so beautiful because there were no cars so it never got dirty. They heated their home with a big stove in the living room that used coal and, every Saturday, they had to wash the curtains and the walls because of the soot from the smoke. She lived in a 9 bedroom house that her family rented rooms to others for $3 a week and it only had 1 bathroom. Her transportation was a sleigh with sled dogs that she had to hook up to go anywhere. The dogs stayed outside all winter and would dig a hole to stay warm. Marie also had the job of "Bringing in the Ice," which was going out on the lake and cutting BIG chunks of ice to be brought back, put in the ice house on the docks and that's what they would use for ice in the summer. She moved off the island, at 17, to St. Joseph, Michigan, and graduated from St. Joseph Catholic School. She met Edward Moschioni and they were married on September 17, 1950. He was in the military and they moved to Big Spring, Texas, where she gave birth to her sons, Edward Mario, Jr. and John Anthony. As they moved around the country, one of the places that they lived in was Battle Creek and, while there, she gave birth to her daughters, Marynella Beatrice and Denise Marie, who were both born in St. Joseph, Michigan. After Marie and Ed split, she graduated from nursing school. She was an industrial nurse at Superior Steel when she met Horace Weak. They were married on April 13, 1974. Marie will always be remembered as a fantastic cook! She loved all food, especially peanut butter! She loved to dance, swim and play golf. She worked for Whirlpool, until her retirement and moved to Scottsdale, Az. She was married to Horace for 34 years until he passed away. Marie met and fell in love with Ted, whom she was with for 5 years until he passed. She moved to Forney for the last 2 years of her life where she stayed active going to Mary's softball games, church, and attending the grandkids and great grandkids activities. Marie loved playing cribbage and Mary played a game with her every night after dinner until a few weeks before Marie passed. She enjoyed and appreciated music and it brought her great comfort and joy. Marie also loved ice cream and was affectionately known as “Ice Cream Grandma and will be greatly missed. Marie is survived by her children: Edward Mario Moschioni, Jr., and wife, Pam, of Plano, John Anthony Moschioni and wife, Tami, of Houston, Marynella “Mary” Beatrice Penn and husband, John, of Forney and Denise Marie Eaton of Phoenix, AZ; 9 grandchildren and numerous great grandchildren; sister, Anne Mainwaring; brother, James McGulpin as well as other nieces, nephews, extended family and a host of friends. A Celebration of her life will be held 11:00am, Friday, June 12, 2020 at c|Life Church in Forney. A gathering of family and friends will be 6:00 to 8:00pm, Thursday, at c|Life in Forney.

The family of Marie Therese Weak created this Life Tributes page to make it easy to share your memories.

Send flowers to the Weak family.