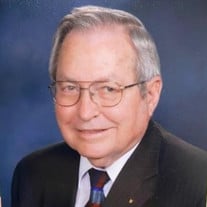 Marion Scoggins Porter, 91, passed away peacefully into his heavenly home Saturday, November 20, surrounded by his family. He was born June 16, 1930 to the union of Lawrence Marion Porter and Etta Fae Scoggins in Gonzales County, Texas. He attended Waelder schools where he played basketball and baseball, and graduated as valedictorian of his class. Porter enrolled in Texas A&M University and graduated with a degree in Agriculture Education in 1947. He married high school sweetheart Audrey Dolores Hallmark in 1951 and to this union were born Constance, Mark, and Judie Porter. Porter served in the 325th Tank Battalion at Fort Knox in Camp Irwin, California as a second lieutenant. During his military service, Porter worked on a secret project for infrared in the Mojave Desert. Porter joined the Soil Conservation Service in Stephenville as District Conservationist, where he and Audrey lived for 21 years and raised their family. He valued volunteering and participated in many community-focused groups during his time in Stephenville including serving as President of the Lions Club, a member of Jaycees, and Federal Workers Group. Porter later moved to Terrell as Area Conservationist, where he lived for the remainder of his life with Audrey. A smart and hardworking man, he was committed to his community and contributed to the lives of countless people throughout his life. Porter believed in Psalms 24: “The earth is the Lord, and the fulness thereof.” He was a people person: he believed in Faith, Family, the Flag & Friends. But most of all, he loved Texas A&M and was a die-hard Aggie to his very last breath. Known to family as Poppaw, and from one impish granddaughter as Pookie Bear, Porter loved a good ribbing. A competitive game player, he taught his children and grandchildren much about life: he passed on his playful spirit, as well as his strong sense of integrity and duty to community to his family. His work ethic was unmatched, and even after he formally retired, he worked for Kaufman County remodeling courthouse offices and mentored trustees who worked on the remodels. Porter served as Deacon, then Deacon Emeritus of First Baptist Church of Terrell and regularly attended the Men’s Sunday School class under the leadership of Keith Clayton, Clayton Watkins, Rick Franklin, Sam Hanes, and Mike Daniel. Porter is survived by his wife Audrey who still resides in Terrell, Texas; their children and children’s spouses: Constance and John Wooley, Mark and Dale Porter, and Judie Porter; as well as their grandchildren: John Paxton Wooley, Jamie Wooley, Marcus Wooley, Crystal Porter, Laura Porter, and Haley Porter; and his great grandchildren Madison, Gray, Mac. Funeral service will be at 11:30am, Tuesday, November 23, 2021 at First Baptist Church in Terrell. Visitation will be 5:00pm to 7:00pm, Monday, November 22, at Max Slayton Funeral Chapel. Interment will be at 11:00am, Wednesday, November 24, at Masonic Cemetery in Waelder, TX (Gonzalez County). Donations in his memory may be made to the First Baptist Church Building & Grounds Committee and to their Matthew 25:35 fund, which helps people in need and mailed to FBC Terrell, 403 N. Catherine, Terrell, 75160 or online at https://www.fbcterrell.org/give

Marion Scoggins Porter, 91, passed away peacefully into his heavenly home Saturday, November 20, surrounded by his family. He was born June 16, 1930 to the union of Lawrence Marion Porter and Etta Fae Scoggins in Gonzales County, Texas. He attended... View Obituary & Service Information

The family of Marion Porter created this Life Tributes page to make it easy to share your memories.

Marion Scoggins Porter, 91, passed away peacefully into his heavenly...

Send flowers to the Porter family.