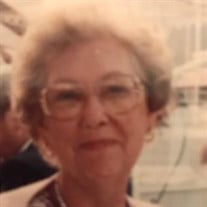 Marjorie (Margie) Jane Packwood Curry passed away in her sleep on April 11, 2020. Margie was born on April 2, 1928 in Louisville, Ky. to the late Claude and Estelle (Welch) Packwood. She was united with those who preceded her in death, her parents, her beloved husband William Nelms (Buddy) Curry, Jr. and her nephew Will Wilson. She graduated from Shawnee High School in Louisville. She went to spend the weekend with her best friend Betty Wilson. Betty’s brother “Buddy” returned from the service that weekend. On August 25, 1950 she married the love of her life, “Buddy”. They spent their honeymoon moving to Texas. In March 1956, with their infant daughter Sarah, they moved to Davidson Dr. in Terrell. There they made lifelong friends and neighbors. Shortly after moving to Terrell they joined the First United Methodist Church. Margie was an active member of the Methodist Women’s Group and the Advance Sunday School Class for as long as she was able to attend. She worked at the Terrell State Hospital for over 20 years with the majority of that time at the Switchboard. She loved reading, crossword puzzles and needlework. Margie and Bill had a special love for Fredricksburg, Tx, which eventually led to further travels. In 1992 they joined a special group of travelers, The Vicers, led by Tom and Rose Snow. Even when her memories were uncertain, she had special memories of her travels with The Vicers. She spent the last 9 years at Terrell Healthcare Center where she was given care and love by the wonderful staff, and other residents, who looked after each other. Left to cherish her memory are her daughter Sarah Coffman (Barbara), her sister-in-law Betty Wilson, the Tadsen family Denise, Thomas and William who called her Great C, and many special friends. A Celebration of Margie’s life is being planned by her family for a later date. In lieu of flowers the family asks donations be made to the First United Methodist Church 503 W. College St. Terrell, Tx 75160, Heifer International www.heifer.org, or to a favorite charity.

Marjorie (Margie) Jane Packwood Curry passed away in her sleep on April 11, 2020. Margie was born on April 2, 1928 in Louisville, Ky. to the late Claude and Estelle (Welch) Packwood. She was united with those who preceded her in death, her parents,... View Obituary & Service Information

The family of Marjorie "Margie" Jane Curry created this Life Tributes page to make it easy to share your memories.

Marjorie (Margie) Jane Packwood Curry passed away in her sleep...

Send flowers to the Curry family.