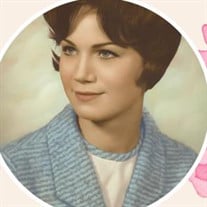 Martha Louise Duncan was born August 31, 1944 in Harlingen, Texas and died October 29, 2021 in Forney, Texas after a long battle with vascular dementia and Alzheimer's. She is survived by her four children who were at her side when she took her last breath; Michael Wayne Batchellor, Mary Anita Batchellor Nichols, Melissa Carol Batchellor Roach, and Joanna Christine Rumbelow Nasr. She is also survived by her sister, Peggy Vestel of Lubbock. Martha was preceded in death by her mother, Ruth Louise Harless McCauley; father, Wayne McKinley Duncan; sister, Barbara Reed; grandchildren: Daniel Lynn Nichols, William Jay Nichols, Marcus Nichols, Ryan Roach, Austin Roach, Abbey Roach Lopez, Riley Roach, Brianna Batchellor, Jude Batchellor, Rebecca Webb, Dalia Nasr, Ameera Nasr and Layla Nasr; and great grandchildren: Amos Nichols and Silas Nichols. Martha's professional career was as an advertising executive. She worked at Sanger Harris, Bloom Advertising, Young and Rubicam, KIVY Radio, and Levinson & Hill. She spent many years in Michigan for her career but moved home to Texas in 2009 and chose to live in Forney to be near her children and grandchildren. She loved crocheting, baking cookies, classic books, all kinds of music, her pets, and mocha flavored coffee. Martha accepted Jesus Christ as a young girl and was baptized alongside her sister, Barbara, at Calvary Road Baptist in Harlingen. But in 2009 when she joined First Baptist Forney, she wanted to make a public profession of faith as an adult and was baptized by Dr. Jimmy Pritchard. Her favorite hymns were “Just As I Am” and “It Is Well With My Soul”. A memorial service will be at 11:00am, Friday, November 12, 2021 at First Baptist Church in Forney with family receiving friends beginning at 10:00am.

Martha Louise Duncan was born August 31, 1944 in Harlingen, Texas and died October 29, 2021 in Forney, Texas after a long battle with vascular dementia and Alzheimer's. She is survived by her four children who were at her side when she took... View Obituary & Service Information

The family of Martha Duncan created this Life Tributes page to make it easy to share your memories.

Send flowers to the Duncan family.