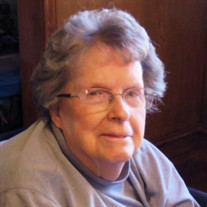 Mary Jane Perry Groene Mary was born April 15, 1928 to Guy and Irene Perry in Indianapolis, Indiana. She was one of nine children. She passed away February 4, 2022 at home, with family by her side in Terrell, Texas. While working at the Indiana Public Library, she met Richard Henry Groene, whom she married on February 4, 1950. While her husband finished his education at Purdue University, they began their family and then moved to Dallas, Texas. She was a wonderful homemaker and devoted mother. After the children were grown, she worked at Richardson ISD in the library. She was especially active as a member of the Episcopal Church of the Transfiguration in Dallas, Texas for 41 years. She was very involved in the church library as a volunteer for over 20 years and was also a member of the Church and Synagogue Library Association. Mary was head of the Prayer Chain and was a member of the Altar Guild as well as baking communion bread for some of the services. Another passion was hand-making cinctures for the priests’ vestments. This is an ancient art that requires much skill and time. She completed dozens for the various priests and Bishop Stanton. Mary found much joy in serving the church for decades. Mary was preceded in death by her husband of 64 years, Richard Henry Groene; parents Guy and Irene Perry; sisters Carolyn Knutson, Patricia Willoughby, and Marjorie Smart; brothers John Perry, David Perry, Richard Perry and Guy Perry. She is survived by her children, Barbara Booth (spouse Danny), Karen Trotter (spouse Roy), and son Mark Groene, her granddaughters Devin Anne Trotter, Laura Guzman (spouse Ramon), great-grandchildren Nathan, Natalie, Nadia and Noel, and brother Norman Perry. A special thanks to the caring staff at Country View Nursing Home and American Home Care. Funeral service for Mary will be at 1:00pm, Thursday, Feb. 10, 2022 at the Episcopal Church of the Transfiguration, 14115 Hillcrest Rd, Dallas, TX 75254 with a private interment at Restland Memorial Park. Her family will receive friends 5:00pm to 7:00pm, Wednesday, Feb. 9, 2022 at Max Slayton Funeral Chapel. In lieu of flowers, donations may be made to the Transfiguration parish library, the Friends of the Riter C. Hulsey Public Library, Terrell, TX or Wounded Warrior Project, PO Box 758516, Topeka, KS 66675.

Mary Jane Perry Groene Mary was born April 15, 1928 to Guy and Irene Perry in Indianapolis, Indiana. She was one of nine children. She passed away February 4, 2022 at home, with family by her side in Terrell, Texas. While working at the... View Obituary & Service Information

The family of Mary Jane Perry Groene created this Life Tributes page to make it easy to share your memories.

Send flowers to the Groene family.