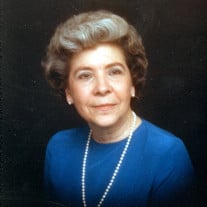 Mary Ellon “Sissy” Stroud was born Dec. 6, 1925 in Royce City. She died peacefully at home on June 14, 2018 following a short illness. She grew up in Hillsboro and Ferris, graduating from Ferris High School in 1943. A dedicated big sister to her 10 siblings, Mary was the Matriarch of the Birdwell family. Mary was preceded in death by her parents, Bill and Emma Birdwell; stepmother Mabel Birdwell and siblings: Bub Birdwell, Jim Birdwell and Sue Anderson. After graduating high school, Mary worked for the U.S. Post Office for many years before joining the U.S. Census Bureau where she met James “Jimmy” Stroud. They married Oct. 7, 1960 and had two children together, Doug and Paul. After her marriage, Mary became a devoted housewife and mother, turning her attention to community activities. She was an active member of Northway Christian Church from 1960 to 2000, participating in numerous church activities, including CWF and the annual Church Bazaar for which worked diligently to create one-of-a-kind Christmas ornaments and baked goods. Mary was an active PTA member, serving as president at Stonewall Jackson Elementary, J.L. Long Middle School and Woodrow Wilson High School while her sons were in school. Following Jimmy’s death in 1980, Mary continued her career, working for Alcohol, Tobacco and Firearms (ATF) division of the government until her retirement. Mary married Martin Edwards in 1999. She moved to Terrell at that time and quickly established herself as a vital member of the community, joining Terrell Christian Church, Social Science Club and Terrell Book Club. Mary remained active in CWF, her Sunday School group and other community programs until her health began to fail in 2018. Martin preceded her in death in 2009. When she wasn’t participating in volunteer projects, Mary enjoyed spending time with her family, working in her flower gardens and shopping. She was loved and respected by many throughout Ferris, Dallas, Terrell and across the country. She will be fondly remembered and sorely missed. Mary leaves to cherish her memory her sons: Doug Stroud and wife, Lori and Paul Stroud and wife, Pam; grandchildren: Jeff, William, Claudia, Brady and Nicole Stroud; great grandchild, Kallie Stroud; siblings: Joel Birdwell, Pat Allen, Debbie Heckathone, Ronny Birdwell, Billy Birdwell, Tim Birdwell and Kim Valdez as well as numerous nieces, nephews, extended family and a host of friends who will continue her legacy of unconditional love. Funeral service will be at 11:00am, Monday, June 18, 2018 at Max Slayton Funeral Chapel with a private interment to follow at Restland Memorial Park. The family will receive friends 3-6pm, Sunday, June 17, 2018 at Max Slayton Funerals and Cremations. The family asks that in lieu of flowers, memorials be made in honor of Mary selfless service to the First Christian Church Building Fund, 405 N. Adelaide, Terrell, 75160.

The family of Mary Ellon Stroud created this Life Tributes page to make it easy to share your memories.

Send flowers to the Stroud family.