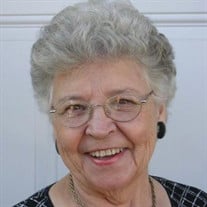 Mary Wallace, longtime resident of Terrell, passed away peacefully on the morning of January 8, 2020 with her family at her side. Mary was born November 25, 1929 in Preston Bend, Ok to Delbert and Mattie (Worbes) Blake, both of whom welcomed her into Heaven along with her husband, Gilbert Wallace, sisters: Margie Thomason and Gelia Diehl; brother, Deb Blake and cousin Mrs. C.B. Briggs. Mary was a faithful and active long-time member of the First United Methodist Church of Terrell. She never judged anyone for not being in the church pew on Sunday, but she was sure to be there herself for as long as she was able. More than once she served as president of her Sunday School class, never unwilling to offer her service and support when it was needed. She and Gilbert owned and operated Wallace Phillips 66 Service Station from the mid-60s until shortly before his passing on November 30, 1970; she once told a son, "Those early days running the store were probably the hardest part of my marriage--- I loved him, but a husband and wife are not meant to be together 24 hours a day." She may have said this with a smile, but her son knew she was telling it exactly as she saw it, as Mary was often apt to do. After she became a single parent, Mary was unwavering in her efforts to nurture, teach, and provide for her children with nothing less than her constant dedication. In 1974, she went to work for Sherwin-Williams, retiring as an Assistant Store Manager after 20 years of loyal service. Even then, she missed talking to her fellow Terrellites on a daily basis, so she took a part-time job at Creative Florist for several years. She was an excellent cook --- people loved her chocolate pies, banana pudding, and buttermilk biscuits. Once, when she planned to bake a cake for someone who'd recently lost a parent and was told it would be appreciated but she needn't go to too much trouble, her reply was, "When you love someone, NOTHING you do for them is ever considered to be trouble." A devoted mother, grandmother, and great-grandmother, towards the end of her life Mary shared a home with her oldest son and was attended to almost daily by her youngest daughter --- they did the "heavy lifting," but their siblings were grateful to be allowed to help whenever needed, just as their mother had taught them to do through her own deeds during a long, loving life. She will be missed by a multitude of those fortunate enough to have known her kindness. Mary is survived by her children: Gilanne Uptmor and husband, John, Karen Griffith and husband, Larry, Dave Wallace, Russ Wallace, Matt Wallace and partner, Juan Luarca, Becky Hathcock and husband, LaRon; grandchildren: Lauren O’Roark and husband Jason, Ray Wallace and wife, Joni, Steven Wallace, Trevor Wallace and wife, Kathleen, Leah Cranford and husband, Casey, Sydney Hathcock, and Susan Uptmor; great grandchildren: Zoe, Violet, Dylan, John, Parker, and Ruby as well as numerous nieces, nephews, extended family, church family and a host of friends. Funeral Service will be at 2:00pm, Saturday, Jan. 11, 2020 at First United Methodist Church in Terrell with interment to follow at Campground Cemetery. Her family will receive friends 6:00pm to 8:00pm, Friday, Jan. 10, 2020 at Max Slayton Funerals and Cremations. In lieu of flowers, the family encourages others to make a donation in Mary's memory to the St. Jude Children's Hospital at www.stjude.org.

Mary Wallace, longtime resident of Terrell, passed away peacefully on the morning of January 8, 2020 with her family at her side. Mary was born November 25, 1929 in Preston Bend, Ok to Delbert and Mattie (Worbes) Blake, both of whom welcomed... View Obituary & Service Information

The family of Mary Wallace created this Life Tributes page to make it easy to share your memories.

Send flowers to the Wallace family.