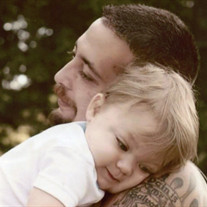 With deepest sorrow, we announce that Mason “Blake” Skinner, age 33, our most beloved son, adoring father, grandson, nephew, cousin and wonderful friend passed away suddenly on Saturday, February 16, 2019. Those who knew Blake, even just a little, lost a shining light in their lives. Blake will be missed everyday by his 6 yr old Son, Mason “Ryit” Skinner; Parents, Wendy and Tommy Skinner: Grandmother, Peggy Skinner, Ryit’s mother, Briana Skinner, all of Terrell, as well as his loving Aunts, Uncles, Cousins and many, many great friends. Blake was born on April 9, 1985 in Terrell, Tx and was a 2003 graduate of Terrell High School. He worked as an Electrician for Lumpy’s Electric in Terrell where his talent for taking care and completing any project given to him was well-known by his co-workers and his supervisors. In his spare-time, Blake loved to go fishing, cooking out on the grill, mud bogging, and trash-talking the Dallas Cowboys…………but his greatest joy in life was being Ryit’s Dad. No father could have been more devoted. Blake was preceded in death by his Grandfather, Billie Skinner, Grandmother, Ludie Skinner and Uncle, Chris Skinner. A Celebration of Life will be held at Life Pointe Church at 2:00 p.m., Saturday, February 23, 2019, at 1600 Griffith Ave, Terrell, TX 75160.

The family of Mason Blake Skinner created this Life Tributes page to make it easy to share your memories.

With deepest sorrow, we announce that Mason “Blake” Skinner,...

Send flowers to the Skinner family.