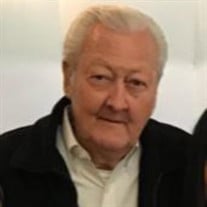 Melvin Roy Wilhite, of Terrell, passed away peacefully on the morning of April 25, 2020 with family at his side. Melvin was born May 21, 1941 in San Angelo, TX to John Melvin and Christine Kathern (Ripple) Wilhite. He was welcomed into Heaven by his Lord and Savior, his beloved wife, Ann, who passed in 2015 as well as his parents. Melvin was born during a time when a man’s word was his bond as well as his livelihood. He had a strong character which enabled him to be the solid foundation of steadfastness and devotion which he demonstrated to both his family and his friends throughout his life. Melvin worked in retail grocery as a manager with Affiliated, A&P, and several independent grocery stores. He and his wife, Ann, opened and operated A&M Produce in North Richland Hills. Melvin “officially” retired in 2007 to spend more time with Ann and their family that had grown to include grandchildren and great grandchildren. He enjoyed gardening and shared freely the vegetables he had from every harvest. Melvin also had a love for all animals, and he had a variety of furry and feathered friends among them dogs, goats, birds with his very favorite being his chihuahua, Molly, who was always by his side. A quiet man with a deep and profound love for his family and those he cared for, Melvin will be greatly missed by all who knew him. Melvin is survived by his children: Tammy Ann Garcia and husband, Mario, Lisa Gail Ringo and husband, Jerry, Melvin Scott Wilhite and wife, Mindy; grandchildren: Jacquelyn Nicole Cazarez and husband, Richard, Stefani Michelle Evans and husband, Tyler, Taylor Marie Mulkey and husband, Nick, Ashley Nicole Henderson and husband, Cody, Jeremy Dale Ringo and wife, Hanna, Emily Ariana Loria and fiancé, John Bird, Tristan Chace Wilhite, and Caden Scott Wilhite; great grandchildren: Kenleigh Marie, Jordyn RaeAnn, and Greyson William; sister, Emelyn Marie Woods as well as other extended family members and a host of friends. A private graveside service will be held and Melvin will be laid to rest next to Ann at College Mound Cemetery.

Melvin Roy Wilhite, of Terrell, passed away peacefully on the morning of April 25, 2020 with family at his side. Melvin was born May 21, 1941 in San Angelo, TX to John Melvin and Christine Kathern (Ripple) Wilhite. He was welcomed into Heaven... View Obituary & Service Information

The family of Melvin Wilhite created this Life Tributes page to make it easy to share your memories.

Melvin Roy Wilhite, of Terrell, passed away peacefully on the...

Send flowers to the Wilhite family.