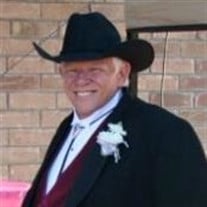 Mike Crowson, of Point, was called into the presence of his Lord and Savior on the morning of January 21, 2018. Mike was born March 24, 1955 in McKinney, Texas to Davy and Barbara Crowson, both of whom preceded him in death. Mike had a dedicated work ethic and he worked as the Service Director with Rockwall Dodge before retiring to spend more time with his beloved family. At every place he worked, and every person who met Mike, knew his word was his bond and everyone had a deep respect for the devotion he had to his family and his friends. He enjoyed the outdoors where he would hunt, fish, shoot skeet, and design and build guns. Mike saw every day and every activity as another chance to make a treasured memory with family and friends. He and the love of his life (whom he loved with every ounce of his being) his wife, Johnnie, were inseparable and their love was often described as “ride or die partners in crime”. Her love for adventure was a perfect match for Mike’s love of making every day fun and their brand of “crazy” was perfectly suited to each other making them soulmates for now and forever. He was an amazing dad to his children and all of his grandchildren had their “Papi” wrapped around their little fingers! There was nothing that Mike wouldn’t do for those he cared for and his generosity was legendary and will be a proud legacy that his family will continue in future generations. Scripture in the book of Revelation tells us that “blessed are those that died in the Lord…for they will rest form their labor and their deeds will follow them” and Mike’s one of a kind personality and ardent devotion to those he loved will be remembered forever. Mike is survived by his beloved wife, Johnnie Crowson of Point; children: Amanda Crowson, Michael Crowson, Misty McDonald, Barbie and Gary Salasman, David and Katherine Crowson, Evan Whitt, and Tanner Crowson; Grandchildren: Ashley Coatney, Thomas Tanksley 3rd, Shelby Batson, Corrigan Crowson, Nathan Crowson, Chandler McDonald, Lane McDonald, Kyle Crowson, Keith Tinnick, Kody Salsman, Khloe and Cheyanne Crowson, and Rayleigh Whitt; siblings: Beverly and Byron Gentry, LeAnn and Ken Allshouse as well as several nieces and nephews including, Ethan, who lives with Mike and Johnnie proving once again that the only thing bigger than Mike’s heart was his home that was always open to anyone that he cared so very much for. Funeral service and celebration of Mike’s life will be at 1:00pm, Thursday, January 24, 2018, at Max Slayton Funeral Chapel with the family receiving friends beginning at 12:00pm to service time.

Mike Crowson, of Point, was called into the presence of his Lord and Savior on the morning of January 21, 2018. Mike was born March 24, 1955 in McKinney, Texas to Davy and Barbara Crowson, both of whom preceded him in death. Mike had a dedicated... View Obituary & Service Information

The family of Michael Crowson created this Life Tributes page to make it easy to share your memories.

Mike Crowson, of Point, was called into the presence of his Lord...

Send flowers to the Crowson family.