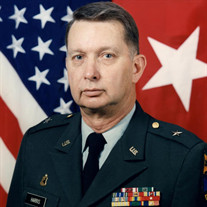 Michael Henry Harris, longtime resident of Forney, passed away peacefully on January 20, 2022 at his home surrounded by family. He was born January 15, 1939, in Dallas to Henry Francis and Nada Amelia (Willingham) Harris. Michael grew up in the Dallas area and enlisted into the Texas National Guard on Feb. 22, 1956, right after his 17th birthday. During the initial 4 years of enlistment, he exhibited many skills in leadership and planning and attained the rank of Sergeant. Michael then completed Officer Candidate School in August 1960. He continued in faithful armed forces service for another 36 years, achieving the final rank of Brigadier General. During his meritorious service, Michael held numerous positions as an officer including Tank Platoon Leader, Battalion Officer in Communication, Electronics, Operations and Training, Brigade Intelligence and Operations, Brigade Commander and Executive Officer, Chief of Training for State Area Command (STARC) as well as Assistant Division Commander for both Support and Maneuver. Michael was also awarded several medals for his service to his country including the Legion of Merit, the Meritorious Service medal with three Oak Leaf Clusters, Army Commendation Medal with Oak Leaf Cluster, and Army Achievement Medal. Michael married his high school sweetheart, Nancy Hanes, on September 3, 1960, at the Pleasant Grove First Baptist Church. He and Nancy moved to Forney in 1976 where they raised their family and became active members of First Baptist Church of Forney. Along with his military obligations, Michael acquired his Bachelor of Science in Mechanical Engineering and worked in the private sector at Dresser Industries as a design/engineer then Campbell Taggert/Anheuser-Busch in Dallas as Director of Engineering. He then worked for Stewart Engineering in Plano as Director for Project Management until retirement. When not working, Michael enjoyed being an avid quail hunter in the winter with his many bird dogs and then, in spring and summer, fishing for bass. His leadership skills were unparalleled and his wisdom which he willingly shared with so many will always be treasured. He was a devoted husband, father, beloved Papa, and great grandfather, brother, uncle, and friend. Michael leaves a legacy of service above self to all and will be missed greatly by all who knew him and never forgotten. Michael is survived by his loving wife, Nancy Harris; son, Dr. Mark Harris and wife, Angela; daughter, Dr. Susan Williams and husband, Brent; grandchildren: Carissa Perry and husband, Jake, Sara Dickinson and husband, Hank, Cassidy Williams, Dylan Harris, and Amy Harris; great grandchildren: Peyton Dickinson, Riley Dickinson and an expected great granddaughter on Jan. 27, 2022; brother, Steve Harris and wife Diane as well as many extended family, church family, military colleagues, and a host of friends. He is preceded in death by his parents and brother David Harris. Funeral service for Mr. Harris will be held at 1:00 p.m., Tuesday, January 25, 2022, at First Baptist Church of Forney. The family will receive friends from 5:30 p.m. to 8:00 p.m., Monday, January 24, 2022, also at First Baptist Church of Forney. Interment with military honors to follow at Hillcrest Cemetery in Forney.

Michael Henry Harris, longtime resident of Forney, passed away peacefully on January 20, 2022 at his home surrounded by family. He was born January 15, 1939, in Dallas to Henry Francis and Nada Amelia (Willingham) Harris. Michael grew up in... View Obituary & Service Information

The family of Michael Henry Harris created this Life Tributes page to make it easy to share your memories.

Send flowers to the Harris family.