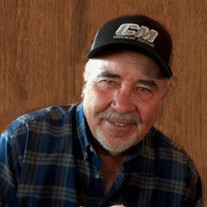 Michael (Mike) Douglas Lamb, of Royse City, passed away peacefully on the evening of Sept. 19, 2021 with his family at his side. Mike was born February 25, 1942 in Ft. Worth, TX to Seth and Doris (Hanes) Lamb, both of whom preceded him in death along with his sister, Peggy Adams and great grandson, Cade Lamb. Mike served with honor and distinction in the U.S. Army as a Ranger during the Korean Conflict. During his enlistment, he began a long boxing career eventually turning professional after his discharge. Mike was active on the boxing circuit from 1963 to 1968 where he was ranked in the super welterweight division. His matches took him traveling all over the U.S. and he even had the chance to spar with Curtis Cokes. Mike married the love of his life, Rebekah Jones, on October 12, 1962, in Dallas and together they raised their son and daughter, Steve and Kelly. Mike worked 15 years for Heilman - Wirtz Concrete Burial Vault company in Cedar Hill. In 1980, Mike and his son, Steve, started their own cemetery/grave service business called Dal-Kauf Cemetery Service where their exemplary work ethic and assurance of every interment service exceeding both the families’ and funeral directors’ expectation. This dedication to every service set-up solidified their reputation in, and around, the Metroplex area. Later, Steve took over the day-to-day business operations with Mike staying in the funeral industry serving the families and staff of Williams Funeral Home in Garland, TX until his much-earned retirement so he could spend more time with Becky and their growing family of grandchildren and great grandchildren. Mike’s legacy of dedication is still evident today in Steve’s continuing commitment to excellence in cemetery service and, now, has been passed on to a third generation, to Mike’s grandson (and namesake) Michael. A man of action with his word being his bond, Mike will be greatly missed and never forgotten. He is survived by his beloved wife, Becky Lamb of Royse City; son, Steve Lamb and his wife, Kim, of Royse City; daughter, Kelly Helbert and husband, Jay, of Royse City; grandchildren: Steven Lamb and wife, Laci, Michael Lamb and fiancée, Allison, Robby Lamb, Kristen Helbert, Micah Lamb and Erika, Katie Helbert and Jace Helbert; great grandchildren: Gage Lamb, Lexi Lamb and Mila Robles; brother, Rusty Lamb and wife, Janie; brother-in-law, Tommy Adams, as well as numerous nieces, nephews, other relatives and a host of friends, all of whom will miss Mike dearly. Graveside service will be at 1:00pm, Monday, September 27, 2021 at Lake View Cemetery in Lavon, TX. the family will receive friends 2:00pm to 5:00pm, Sunday, September 26, 2021 at Max Slayton Funeral Chapel. For those wishing, the family suggests that in lieu of flowers, donations be made to American Kidney Foundation at www.kidney.org or to American Lung Association at www.lung.org.

Michael (Mike) Douglas Lamb, of Royse City, passed away peacefully on the evening of Sept. 19, 2021 with his family at his side. Mike was born February 25, 1942 in Ft. Worth, TX to Seth and Doris (Hanes) Lamb, both of whom preceded him in death... View Obituary & Service Information

The family of Michael "Mike" Lamb created this Life Tributes page to make it easy to share your memories.

Send flowers to the Lamb family.