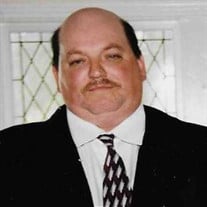 Michael Wayne Meador, of Terrell, passed away January 10, 2019. Mike was born July 13, 1954 in Terrell to Curtis and Dorothy (Golightly) Meador. He was welcomed into Heaven by his parents and his wife, Barbara Meador, and son, Gerald Meador; siblings: Danny Meador, Suzanne Meador, Jerry Meador and Debbie Meyers. Mike grew up in Terrell and attended Terrell Schools. On May 31, he married Barbara Sue Powell and together they had four wonderful sons: Gerald, Michael, Tony and Bobby. Mike worked in circulation with the Dallas Morning News for over 20 years, as well as working for several local newspaper offices. In August, 1988, Mike lost both his beloved wife and his son, Gerald. During that tragic time, he devoted his life to providing for and taking care of his sons. Mike enjoyed watching westerns, reality shows that showcased man vs. nature and cheering for the Dallas Cowboys. When Mike was in town, he was often found at City Barbershop catching up with his friends or at Cowboys Quik Stop, visiting and buying Scratch-Off tickets. He loved to play dominos and had a competitive spirit. His grandchildren had him wrapped around his finger and they always knew their Big PawPaw loved them very much. Mike’s memory will be treasured by all who knew him. Even though his family will miss him greatly, they take immeasurable comfort in knowing that he is together again with Barbara and Gerald. Mike is survived by his sons: Michael D. Meador and wife, Kathy, of Rockwall, Tony Meador and wife, Amber, of Terrell, Bobby Meador and wife, Jennifer, of Forney; grandchildren: Addison, Brock, Zackery, Catelynn, Heyleigh Sue, Joseph and Bailee Meador; siblings: Lynne Meador, Cathy Meador, Mary Friedrich, Patricia Lara, Billy Joe Meador as well as numerous nieces, nephews, cousins, extended family and a host of friends. He leaves behind his faithful companion and best friend, Bear. A Celebration of Mike’s life will be Wednesday, January 16, 2019 at 2:00 p.m. at Max Slayton Funeral Chapel. A private interment will be held at a later date where he will be laid to rest with Barbara and Gerald at College Mound Cemetery

Michael Wayne Meador, of Terrell, passed away January 10, 2019. Mike was born July 13, 1954 in Terrell to Curtis and Dorothy (Golightly) Meador. He was welcomed into Heaven by his parents and his wife, Barbara Meador, and son, Gerald Meador;... View Obituary & Service Information

The family of Michael (Mike) W. Meador created this Life Tributes page to make it easy to share your memories.

Send flowers to the Meador family.