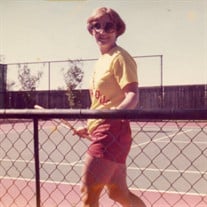 Myrna Lawson, lifetime resident of Terrell, passed away peacefully October 30, 2017. Myrna was born June 25, 1941 in Terrell to Eugene D. and Blanche (Vick) Woodall, both of whom preceded her in death along with her brother-in-law Raymond Lawrence. She truly enjoyed playing and watching any sport especially tennis and golf. Myrna was Asst. Manager at Lamar Bowling Lanes along with her active membership in Terrell Tennis Association and Oak Grove Ladies Golf Association. She was known for constantly developing her athletic talents as well as building lifelong friendships with so many who were blessed to meet her. Myrna was also a member of First Baptist Church of Terrell and was a devoted and loving wife, mother and grandmother. She could, and would, meet people of all walks of life and within minutes, find a common interest to talk about. Her most treasured memories are ones of time spent with family and her devotion for them will be a cherished legacy they each will take forward into future generations as proof and testimony of her unconditional love. Myrna is survived by her beloved husband, Grady Lawson of Terrell; son, Rodney Lawson and his wife Kathryn of Kaufman; daughter, Paula Johnson and husband Marvin of Canton; son, Terry Lawson and wife Debra of Terrell; sisters: Charlotte Lawrence and Juanda Woodall, both of Terrell; brother, Larry Woodall and wife Rita of Terrell along with several grandchildren, great grandchildren and a host of friends, all of whom loved her and will miss her dearly. Funeral service will be 2:00 p.m., Friday, November 3, 2017 at First Baptist Church of Terrell with interment to follow at Oakland Memorial Park. Family will receive friends 6 pm to 8 pm Thursday, November 2, at Max Slayton Funerals and Cremations. In lieu of flowers, the family requests memorials be made to College Mound Cemetery Assoc. P.O. Box 105, Terrell, Tx 75160.

Myrna Lawson, lifetime resident of Terrell, passed away peacefully October 30, 2017. Myrna was born June 25, 1941 in Terrell to Eugene D. and Blanche (Vick) Woodall, both of whom preceded her in death along with her brother-in-law Raymond Lawrence.... View Obituary & Service Information

The family of Myrna Lawson created this Life Tributes page to make it easy to share your memories.

Send flowers to the Lawson family.