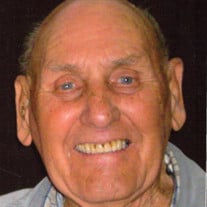 N. V. Holland, of Terrell, passed away on December 30, 2016 into the presence of his Savior, Jesus Christ. N. V. was born December 23, 1924 to Nathan Vincent and Della (Bolt) Holland, both of whom preceded him in death along with his son, Larry Holland, brother, Billy Joe Holland and sisters: Dorothy Craig and Louise Phillips. N. V. was a tireless servant to the Lord and his service began with his charter membership at First Assembly of God in Terrell. He was an active member who set the example for sacrificial giving of his time, his dedication and his resources to further the Kingdom here on earth. He made sure that his actions were in accord with his words and N. V. will forever be remembered at a man whose morals and foundation were grounded in the Word of the Lord. He served with the church as trustee, deacon, Usher, landscaping of church grounds, and his smile and friendliness was at its best when he would greet before services and other church activities. N. V. also owned and operated Holland Construction here in Terrell and his reputation as a fair and honest work as a general contractor was well known by both customers and colleagues. He also served honorably in WWII in the 101st Airborne where he was a paratrooper and fought in the Battle of the Bulge. When the war was declared over, N. V. returned home on a tugboat. When he returned home in March, 1946, he met the love of his life, Rachel White, and he stated to a friend that he would marry her. On Aug 3, 1946, he made good on his promise and together he and Rachel shared over 70 years together. N.V. was a man who lived life simply and kindly and it is certain that when he entered into Heaven, he heard the words “Well done, good and faithful servant!”. Until they are all reunited, N. V. leaves a legacy of love, kindness and service to his family and friends. He is survived by his beloved wife, Rachel Holland of Terrell; daughters: Dianne High and husband Hollis of Kaufman, Shirley Bushnell and husband, Worth (PeeWee), of Terrell; granddaughter, Rebecca Bunch and husband, Bobby Glenn; brother, Clyde Bennett, Jr.; sisters: Mildred Lawrence, Wynice Blackwell, Wynell Carter as well as numerous nieces, nephews, extended family, church family and a host of friends who loved him and will miss him dearly. Funeral service will be at 2:00pm, Tuesday, Jan. 3, 2017 at First Assembly of God Church in Terrell with interment to follow at Highland Memorial Gardens. The family will receive friends 6-8pm, Monday, Jan. 2, 2017 at Max Slayton Funerals and Cremations. For those wishing to honor N. V.’s life of service, memorials may be made to Terrell’s First Assembly Children’s Ministries, 203 Main, Terrell, TX, 75160.

N. V. Holland, of Terrell, passed away on December 30, 2016 into the presence of his Savior, Jesus Christ. N. V. was born December 23, 1924 to Nathan Vincent and Della (Bolt) Holland, both of whom preceded him in death along with his son, Larry... View Obituary & Service Information

The family of N. V. Holland created this Life Tributes page to make it easy to share your memories.

Send flowers to the Holland family.