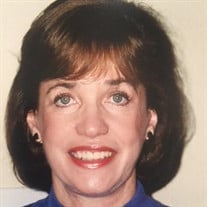 Norma Jean Harvel Helm Webb, of Mount Ida, AR, passed away on January 21, 2019 after a long battle with Alzheimer’s. She will always be remembered as an optimistic, loyal and loving friend, wife, mom, sister, sister-in-law, cousin and Mama Jean to all who knew her and loved her. Norma was born September 13, 1939 to Lillie Mae Adkison Harvel and Ross Howard Harvel in Fort Worth Texas. She attended Keller schools, received a BS from Texas Tech University, where she was selected as Distinguished Alumna in 2005, received a Masters of Secondary Education from the University of Texas of the Permian Basin and post graduate work in Sociology and Art. Norma was a lifelong learner participating in and teaching art courses and workshops in the US and abroad. Norma married Gerald Jay Helm on May 25, 1960 and lived in Lubbock, Dallas, Fairfax VA, and Fort Worth where she began her family, taught Middle and High School art and played the piano at the churches she attended. The family moved to Midland, TX in 1968 and Norma, always caring about people and her community, and a born leader, gave of her time and talents playing the piano at Fannin Terrace Baptist Church and serving as Board Chairman or President for Arts Assembly of Midland and Midland Arts Association. She also served as Board Member for Junior Achievement, Salvation Army Dress-A-Live Doll, Texas Society for the Prevention of Blindness, and Samaritan Counseling Center. She practiced her art, volunteered at Casa de Amigo and was a member of the American Watercolor Society. Norma’s faithful husband, Gerald, passed away unexpectedly in 1977 and Norma married James David Webb on September 27, 1980. They are members at First Presbyterian Church of Midland. Norma spent the next 18 years working for the non-profit organizations she cared so much about. She was executive director of the Arts Assembly of Midland, Director of Marketing for The American Airpower Heritage Group and Executive Director for Junior Achievement of Midland. Norma used her artistic skills and was co-owner with Claire Woodcock of “Connection”, a national company which designed, manufactured and wholesaled blank stock for invitations until Connection was sold in 1998. She became a licensed pilot and organized Jessica’s Heroes Parade. She served on the boards of Executive Women of Midland, Midland Chamber of Commerce, and Leadership Texas. Upon retirement in 1998 Norma was selected as the Distinguished Artist for the Celebration of the Arts. She re-entered the community as a volunteer, and served on many boards, including the Texas Aerospace Commission, appointed by then Governor George W. Bush, Salvation Army Board, Midland Community Theatre, High Sky Children’s Ranch, Permian Basin Petroleum Museum, Midland Airport Economic Development Board and Texas Commission on the Arts. Norma always had a sense of adventure and traveled with Jim as she continued her love for art, teaching watercolor on cruise ships around the world. Norma was strong in her faith, loved her friends, and always put others first. In 2012, Norma realized her Alzheimer’s was advancing and moved to Mount Ida, Arkansas to be up the hill from her brother and sister-in-law, both of whom she loved so much, and enjoy the beauty of the hills and the lake. She was always happy there, looking out on the beauty, enjoying her family and faithful caregivers, Wanell Hill, Alice Carmack, Carolyn Farris, Marilyn Burrow, and Penny Starr. Norma was preceded in death by her husband, Gerald Jay Helm, and parents Ross Howard Harvel and Lillie Mae Harvel. She is survived by her husband, James D. Webb; brother, Paul Harvel of Little Rock; daughter, Lisa Helm Ballew and husband Gregg Ballew of Dallas; son, Rodney Jay Helm and wife Melissa Helm of Coppell; grandchildren: Natalie Ballew, Davis Helm Ballew, Audrey Helm and Caroline Helm and sisters-in law: Barbara Harvel and Sandra Helm Kirk as well as many other extended family and a host of friends.

Norma Jean Harvel Helm Webb, of Mount Ida, AR, passed away on January 21, 2019 after a long battle with Alzheimer&#8217;s. She will always be remembered as an optimistic, loyal and loving friend, wife, mom, sister, sister-in-law, cousin and... View Obituary & Service Information

The family of Norma Jean Helm-Webb created this Life Tributes page to make it easy to share your memories.

Send flowers to the Helm-Webb family.