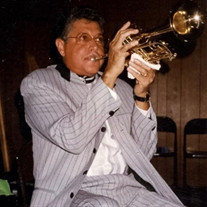 Norman Tapia Olivarez, finally healed, went home to be with his Lord on June 21, 2019, at his home in Kaufman, Texas surrounded by his loving family. He was born on January 31, 1942 in San Antonio, Texas to Filiberto and Margarita Tapia Olivarez, both of whom preceded him in death along with his siblings, Galacion, Filiberto and Mary. Norman was raised in San Antonio along with his 5 siblings. He attended school there and, while in high school, was placed in a class which gave him a job opportunity where he learned about the printing business, which would ultimately be the occupation where he would spend the rest of his life. After completing high school, he enlisted in the Navy where he served for 5 years, having gained the rank of Seaman. Norman married the love of his life, Angela Bonds, on July 25, 1963, in Tuscumbia, Alabama. They met in San Antonio while Angela was attending Bible college. The two were introduced by Norman’s niece, with whom Angela attended church. After knowing each other for some time, Norman asked Angela if she would marry him. Even saying he would travel to her home in Mississippi to ask her dad for his blessing. Norman bought the perfect ring, mailed it to Angela, and she has worn it ever since. They were married on a Thursday and left the same night to drive to San Antonio to start their wonderful life together. Norman was very active in his church, playing his trumpet in their traveling orchestra. Two weeks after their wedding, the orchestra was scheduled to play in Mexico City. They took the opportunity and had their honeymoon while there. In December 1965 Norman was discharged from the Navy. Norman and Angela moved around quite a bit before they settled down in their home in Oak Grove. Norman was always looking for the best job to support his family. He and Angela remained faithful to the Lord through all their years together. Norman would fill positions at the churches where they were members, including Sunday School superintendent and choir director. He loved music, especially Tejano music, and enjoyed having it as a part of his life. Norman and his family moved to Kaufman in 1979. They continued to raise their four children in a God-loving faithful home. For a short time in the late 70s, Norman and Angela opened a restaurant in Kaufman known as “El Camino Real”. There they served delicious Mexican food to the community. In the early 80s, Norman and Angela decided to open a printing business of their own, “Clear Film Printing”. Once located in downtown Kaufman and eventually moving to highway 175 where it is still today. Their children and even some grandchildren have worked there at some time, truly making it a family business. Norman could most often be found working in some way. Whether it be at “the shop” or at home in his yard. His yard was never found unmanicured, flower beds not minded, and pool not clean. He found any reason to be outside. At one point working with his horses, to later in life sitting outside with his dog, Roxie. Norman was the patriarch of his family and set the example of what it meant to do anything to provide for the family. Poppy, the name his grandchildren gave him, loved being with his family; his grandchildren, especially, from letting them drive his brown truck the back-way home from the shop, to watching them swim in the pool for hours or taking them for weekend trips to the lake. He could not say no to them. This continued to his great grandchildren. Poppy loved to play with trains on the floor or watch them explore outside. He attended any and all activities he could, including graduations, field trips, even stepping in for dad activities if needed. Anytime his family was around him, he was content. He and Angela would often host dinner where he was manning the grill and she was making the sides. He really enjoyed her cooking, especially enchiladas. Everyone knew if we went to Neena and Poppy’s, we were leaving with a full stomach. Poppy loved when the family was together. He was always dressed in the best. At home, he would be in nothing less than khakis and a collared shirt. Even at work, if you ignored an ink stain or two, he dressed very well. When it came to church, he was always in a suit and tie, putting his best foot forward. Norman loved the Lord and it showed throughout his life. He was a member of the First Assembly of God in Terrell where he and Angela attended faithfully. When he was able, Norman would occasionally play the trumpet during worship services. He loved his church and church family. The long-lasting friendships he gained there were very important to him. They will all miss him very much. Norman leaves to cherish his memory, his beloved wife of 56 years, Angela Olivarez; his loving children: Norma Mooney and husband Jimmy, Michael Olivarez and wife Christie, Mark Olivarez and wife Marisa, Daryl Olivarez and wife Deanna; grandchildren: Lyndsey, Mallory, Nathan and wife Sarah, Daylon and wife Courtney, Macey and husband David, Namon, Maegan and husband Joe, Kayla and husband Miguel, Natalee and husband Gil; great grandchildren: Hayden, Isabella, Raela, Camden, Cade, Elliana, Laci and soon to arrive, Russell Norman; sisters, Eva Shirey and Martha Salas; sister in law, Anna Matlock, as well as many nieces, nephews, extended friends and family who will miss him dearly. Funeral service will be at 11:00am, Monday, June 24, 2019 at First Assembly of God in Terrell. Interment will be at 2:30pm, Monday, at Wilson Chapel Cemetery. The family will receive friends Sunday, June 23, 2019 at 4:00p to 6:00pm at Max Slayton Funerals and Cremations.

Norman Tapia Olivarez, finally healed, went home to be with his Lord on June 21, 2019, at his home in Kaufman, Texas surrounded by his loving family. He was born on January 31, 1942 in San Antonio, Texas to Filiberto and Margarita Tapia Olivarez,... View Obituary & Service Information

The family of Norman Olivarez created this Life Tributes page to make it easy to share your memories.

Norman Tapia Olivarez, finally healed, went home to be with his...

Send flowers to the Olivarez family.