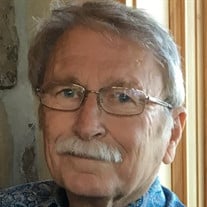 Orville Lynn Lockaby was born on April 3, 1944 in Dallas, TX. He went to be with the Lord on December 31, 2018. Orville was a humble man of great character. He was one of those men who never looked down on people and would give anyone anything he had or he would find a way to get it for them. Orville graduated from Granbury High School in 1962 after which he attended Texas Wesleyan College. Orville married the love of his life, Cindy, whom he affectionately referred to as his “Princess,” on April 27, 1968. They celebrated 50 years of marriage in April, 2018. He proudly served his country in the U.S. Army where he was a Sergeant and a Marksman Expert Sharpshooter. He worked as an Electrician and was a member of IBEW Local #20. His expertise was not limited to the electrical side of things by any means. Orville also had an innate talent to be able to “figure anything out.” He was a man of many God given talents and skills. He was known for his uncanny ability to rebuild cars and his artistic eye which was seen in his photography and pencil drawings. Orville had a creative eye when it came to his drawings and photography. Some of his most memorable moments were taking his grandchildren and great grandchildren for rides on the tractor and looking for bunnies in the pile of tree limbs at their house. He loved being outside and wanted to share his love for nature with his family. Orville and Cindy loved to travel and enjoyed the great outdoors, especially the Rocky Mountains of Colorado. It was very evident through his life that he put God and his family first above all else. Those left to carry on Orville’s legacy are his loving wife, Cindy Lockaby, his daughters, Tamara Burgess and husband, Darren, of Terrell, TX, Tonya Kelly and husband, Chad, of Magnolia, TX. Others left to cherish “Dado’s” memory are his grandchildren, Ashley Rice and husband Chase, Blake Burgess, Hayden Kelly, Heston Kelly, and Hadley Kelly. His great grandchildren, Blakeley, Lincoln, and Berkeley Rice also had the privilege to spend precious time with their “Dado.” In addition, he will be forever remembered by his brother, Anthony Lockaby and wife, Betty; his sister, Linda Anglemyer and husband, Dean, as well as many nieces, nephews, and other extended family members and friends who loved him and will miss him dearly. He was preceded in death by his mother and father, Homer Lockaby and Mae (Stinne) Lockaby. A Celebration of Life for Orville will be at 11:00 am on Saturday, January 5, 2019, at Community Life Church (c|Life), 204 FM 1641, Forney, TX 75126. In lieu of flowers, memorials may be made in honor of Orville Lockaby to St. Jude’s Children’s Research Hospital at http://www.stjude.org or to Terrell Animal Alliance at 13802 Sarah Lane, Terrell, TX 75161 or online at https://www.paypal.com/fundraiser/charity/187606

Orville Lynn Lockaby was born on April 3, 1944 in Dallas, TX. He went to be with the Lord on December 31, 2018. Orville was a humble man of great character. He was one of those men who never looked down on people and would give anyone anything... View Obituary & Service Information

The family of Orville Lynn Lockaby created this Life Tributes page to make it easy to share your memories.

Send flowers to the Lockaby family.