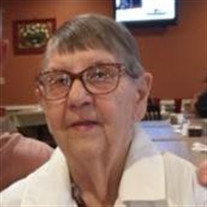 Patsy “Pat” Thomas, born July 22, 1930 in Dallas, Tx to and passed away January 29, 2020. She was born to Edward Elliot and Winifred Helen Belew Rouse, both of whom preceded in her death along with her husbands, Henry N. Martin and Paul Thomas and granddaughter, Heather Kristine Martin. Pat grew up in Dallas and graduated from Adamson High School in Dallas. She was married to Henry N. Martin for 50 years until his passing. Together, they owned and operated Martins Drive In Grocery in Dallas near Fair Park for many years. After selling the store, she went to work at Montgomery Wards at Big Town and then, later, working for Sears at Town East. Her friendly personality and her beautiful smile were pivotal to so many that she helped in retail. Pat always had a great attitude and put the customer first every day. In August of 2000, she married Paul Thomas in until his passing in July 2009. She was very independent and had many hobbies to occupy her time and share with others. Pat loved to do crafts and sew and, for many years, she made Raggedy Ann and Raggedy Andy dolls as gifts for others. She was also an accomplished cook and all her recipes were enjoyed but her family’s favorite was her signature chicken and dumplings. Pat was always ready to watch Jeopardy or Wheel of Fortune where her avid reading helped her know most of the answers! She also loved traveling on cruises where many cherished memories were made. Time spent with her family and friends was time that Pat treasured, and she will be missed by all who knew her. Pat is survived by her children: Michael Elliot Martin of Ft Walton Beach, Fl., Sheryl Annette Marmon and husband, Teddy Clarence, of Wilburton, Ok, Dianne Marquez of Terrell and Randy Sherman Martin and wife, Victoria, of Rocklin, Ca.; 10 grandchildren, 6 great grandchildren, 4 great-great grandchildren; stepdaughter, Nena Young of Georgetown: sister, Betty Louise Jefferson of Van and nephew, Mickey Jefferson also of Van as well as other extended family and a host of friends. Her family requests, in lieu of flowers, memorials be made to Terrell Animal Alliance, 10474 County Road 2326, Terrell, TX 75160 or at http://www.facebook.com/terrellanimalalliance.

The family of Patsy (Pat) Thomas created this Life Tributes page to make it easy to share your memories.

Send flowers to the Thomas family.