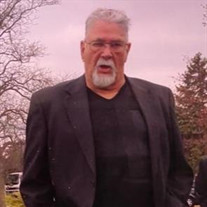 Paul Buford Jones, of Terrell, went to be with his Lord and Savior on November 5, 2021. Paul was born on November 24, 1940, to parents Roy and Lilly (Beaver) Jones in Edmond, West Virginia, both of whom preceded him in death along with his brother, Howard Jones; sister, Nola Reid; and first wife, Mary Jones. Paul served in the Navy from 1958-1961 and after his time in the military, he began a career in truck driving which took him all over the United States. Paul was a wonderful husband to his first wife, Mary, until her passing from breast cancer early in their marriage. He then married Jean and she also passed away before Paul. He found strength in the Lord during these times and he developed a closer relationship with his Savior and his family. On June 24, 1989, Paul found love again with Barbara Funderburk as he married her in Kenosha, WI. In September of 2009, they moved to Texas. He and Barbara became members of Victory Baptist Church in Terrell where they made many lasting friendships. Paul loved to show the love of God to everyone he met and he would take every opportunity to tell folks about the saving gift of Jesus that was available to everyone. Reading his Bible was one of his favorite pastimes and his quiet time with the Lord was an important part of every day for Paul. In his spare time, Paul loved to watch the newscasts on television to stay informed as well as feeding and taking care of the wild birds around his home. He set up many feeders and water fountains so that he could enjoy watching all his feathered friends on beautiful days. He was a loving husband, devoted dad, and cherished Papa and Grandpa and he will be greatly missed but never forgotten by all who knew him. Paul is survived by his loving wife, Barbara Lynn Hale Jones, of Terrell; children: Andrew Jones and wife, Samantha, of Kenosha; James Hale, of Kenosha; Sabrina Antonucci and husband, Steven, of Terrell; Nathan Jones, of Kenosha; and Eric Jones, of Kenosha; grandchildren: Cassandra Speer and husband, Dan; Nicholas Jones, Elizabeth Jones, Sierra Stanley, Nathan Hale, Jesina Hale, Riley Hale, Kayla Hale, Nora Hoffman, Jarred Hoffman, Tatjana Hale, Kamryn Hernandez, Kyleigh Hernandez, Eryka Hernandez, Nickolas Antonucci, Kirsten Antonucci, Kailee Antonucci, and Cayden Antonucci; great grandchildren: Charlotte, Everett, Melody, Louis, James, Eva, Faye, Kylah, and Damond; brother, Don Jones of West Virginia as well as extended family, church family and a host of friends, all of whom will miss him greatly. Funeral service will be at 11:00am, Friday, November 12, 2021 at Max Slayton Funeral Chapel with interment at Oakland Memorial Park. The family will receive friends beginning at 10:00am to service time.

Paul Buford Jones, of Terrell, went to be with his Lord and Savior on November 5, 2021. Paul was born on November 24, 1940, to parents Roy and Lilly (Beaver) Jones in Edmond, West Virginia, both of whom preceded him in death along with his... View Obituary & Service Information

The family of Paul Jones created this Life Tributes page to make it easy to share your memories.

Paul Buford Jones, of Terrell, went to be with his Lord and Savior...

Send flowers to the Jones family.