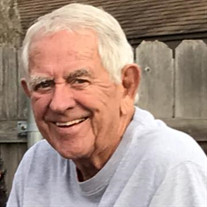 ***MR. LEE'S SERVICE WILL BE LIVESTREAMED AT 10:55AM ON WEDNESDAY*** Paul Larry Lee, of Terrell, passed away on June 22, 2021. He was born October 2, 1938 in Drummond, OK to Marion Chester and Katherine (Thrasher) Lee, both of whom preceded him in death along with his beloved wife, Delories Lee. Paul was born on his family’s farm in Drummond, OK and they moved to Hennessey, OK when he was in fourth grade. He went on to graduate from Hennessey High School where he was a three-sport participant. He received his B.S. from Oklahoma State University in 1960 and then was active in the US Army that same year until 1965 where he attained the rank of Staff Sgt in the reserves. He met, and married, his best friend, Delories, and together they had a wonderful life raising their children until her passing in 2018. Paul was an avid hunter and fisherman during his whole life and was also an active fast-pitch softball player during the 50s and 60s. IN 1978, he began running and entering races, eventually completing over 700 races during the next 30 years. He finished 57 of these races that included distances of over 26.2 miles in length and completed 2 races of over 100 miles-one at Lake Tahoe, CA and one at Leadville, CO. with his final marathon being completed at the age of 73. His immense knowledge of running and the mentality required to successfully accomplish races, earned him a position as editor of the magazine for the Dallas Running Club for two years. His insightful anecdotes and wisdom regarding the sport of running were also evident in his published articles that he wrote under the pseudonym of “Rotten Egg”. Paul had a thirst for always learning new things or subjects and his voracious reading habit averaged him one book a week being read. He was a man of incredible knowledge and even greater accomplishments, and he will be greatly missed by all who knew him. Paul is survived by his children: Micki Musser and husband, Gregg, of Terrell, Mindi Mayfield of Irving and Mike Mayfield and wife, Kris, of Tulsa; five grandchildren: Linzie Mills and husband, James, Logan Musser, Kinzi Mayfield, Kassidy Marsenison and husband, Max, and JoziRose Maras and husband, Michael as well as two great grandchildren: Luka and Camille; brothers: Jerry Lee and wife, Marilyn, Darrell Lee and wife, Gwen, and Gene Lee; sister-in-law, Norma Sue Heister and her children, Kari and Katari along with many other extended family and a host of friends Paul made during his life, especially his special friend, Alice Wilhoit. A Celebration of his life will be at 11:00am, Wednesday, June 30, 2021 at Max Slayton Funeral Chapel with inurnment to immediately follow at College Mound Cemetery. For those wishing, memorials may be made to the Methodist Day School, 503 W. College St., Terrell, 75160 or to the Terrell Prime Track Club (for youth), 404 S. Hattie, Terrell, 75160 or at https://www.facebook.com/terrell.prime.9

***MR. LEE'S SERVICE WILL BE LIVESTREAMED AT 10:55AM ON WEDNESDAY*** Paul Larry Lee, of Terrell, passed away on June 22, 2021. He was born October 2, 1938 in Drummond, OK to Marion Chester and Katherine (Thrasher) Lee, both of whom preceded... View Obituary & Service Information

The family of Paul Larry Lee created this Life Tributes page to make it easy to share your memories.

Send flowers to the Lee family.