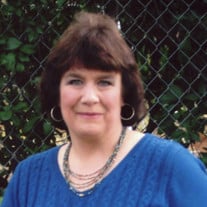 A funeral service for Paula Elaine Lovell of Terrell, Texas will be at 3:00PM, Sunday, December 3, 2017, at Chisholm Cemetery Chapel with her family and friends leading the service. Graveside service will follow. Visitation will be at 2:00PM at Chisholm Cemetery Chapel prior to the services. Funeral and Committal services will be under the direction of Max Slayton Funerals and Cremations. Ms. Lovell went to be with the Lord on Tuesday, November 28, 2017. Paula was born January 16, 1961 in Longview, Texas. She spent the majority of her life in Terrell, Texas and graduated from Terrell High School in 1979. Paula developed her strong and steadfast work ethic working in the bakery at Brookshire's during her high school years. She then began her professional career with American National Bank where she spent 16 years in the bookkeeping and credit departments before spending the past 20 years with Terrell Independent School District. Most recently, Paula served TISD as secretary at the Alternative Center campus where she provided a friendly, positive influence for students and staff. Her friendship and love for others will be missed. Paula’s faith in Jesus Christ reminds us of the hope available to all who believe in Him. Ms. Lovell is survived by her parents, James and Annette Lovell; sisters and brothers-in-law: Margaret & Joe Matura and Sherrie & Mike McBurney; nieces and nephews: Amanda & Michael Beckerich, Katie & Jeff Sullivan, Matt & Laura Matura, Rhonda Talbert, Zachary & Autumn Wiley, and Casey & Meredith Wiley; great-nieces and great-nephews: Cameron Beckerich, Ariana Sullivan, Jarek Sullivan, Reese Wiley, Reagan Wiley, Joe & Taylor Wheeler, Ally Wiley, Caden Wiley, Traci Talbert, Tryce Talbert, Andy Matura, and Easton Wheeler; along with numerous cousins and friends. Pallbearers will be Michael Beckerich, Jeff Sullivan, Matt Matura, Zachary Wiley, Caden Wiley, and Casey Wiley.

A funeral service for Paula Elaine Lovell of Terrell, Texas will be at 3:00PM, Sunday, December 3, 2017, at Chisholm Cemetery Chapel with her family and friends leading the service. Graveside service will follow. Visitation will be at 2:00PM... View Obituary & Service Information

The family of Paula Lovell created this Life Tributes page to make it easy to share your memories.

A funeral service for Paula Elaine Lovell of Terrell, Texas will...

Send flowers to the Lovell family.