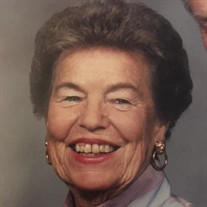 Peggy Joyce Howard Nadolski passed away peacefully at Sunrise Senior Living on December 15, 2018 after a valiant struggle to recover from a stroke she had suffered four years ago. She was born Feb. 13, 1924 in Marietta, Oklahoma to Ruth Gray Howard and Jason Hawthorne Howard. While Peggy was growing up, Paul Miller, who would marry Peggy’s mother Ruth, had a great influence during her childhood. Together, he and Ruth both were strong foundations of support and love for Peggy and her sister, Billie Marie. Peggy graduated from public schools in Marietta after which she graduated from Oklahoma State University, known as Oklahoma A&M at that time. She was a proud member of Kappa Alpha Theta sorority and she maintained an active role in Kappa Alpha Theta events throughout her life. Peggy became especially proud when her granddaughters, Allison and Leah, also became Thetas at Texas Tech University. After college, Peggy became a flight attendant with Braniff Airlines. She maintained an active role in the Clipped B’s, an association of former Braniff employees. She married Stanley John Nadolski in 1948. Peggy loved her family and many dear friends. She never met a stranger, was generous and approached everything in life at full speed with 100% effort. Peggy was a devoted member of the Terrell First Christian Church for 56 years where she was involved in every aspect and activity of the church. She was an active and dedicated volunteer of the Terrell community having volunteered with Meals on Wheels and Terrell State Hospital where Peggy tirelessly worked on “From Numbers to Names-Restoring Dignity” project at Wildwood Cemetery. This project established a marker with the name, date of birth and date of death for every person resting at Wildwood Cemetery on the grounds of the State Hospital. She was an avid golfer, tennis and bridge player right up to her 90th birthday. She will be greatly missed by her family and dear friends. Peggy is preceded in death by her husband, Stanley John Nadolski, who passed away Feb. 4, 1993. She is survived by her sister, Billie Marie Lindsey; sons: Stanley Paul Nadolski and wife, Linda, James Gray Nadolski and wife, Lisa,; grandchildren: Allison Abbott and husband, Todd, Leah Holleman and husband, Mark, Preston Nadolski and wife, Jessica, and Kelsey Nadolski; great grandchildren: Kace Abbott, Brooks Abbott, Luke Holleman, Paige Holleman, Grayson Nadolski, Camilla Nadolski and Audri Anciso; numerous great-nieces and -nephews as well as other extended family and a host of friends. Funeral service will be 11:00am, Wednesday, December 19, 2018, at Max Slayton Funerals and Cremations. The family will receive friends beginning at 10:00 am until service time. For those wishing, memorials may be made in Peggy’s honor to: First Christian Church, 405 N. Adelaide, Terrell, 75160, Wildwood Cemetery Restoration, http://www.tshvolunteercouncil.org/wildwood-cemetery/help-wildwood-cemetery/ or to MD Anderson Cancer, https://www.mdanderson.org/donors

Peggy Joyce Howard Nadolski passed away peacefully at Sunrise Senior Living on December 15, 2018 after a valiant struggle to recover from a stroke she had suffered four years ago. She was born Feb. 13, 1924 in Marietta, Oklahoma to Ruth Gray... View Obituary & Service Information

The family of Peggy Nadolski created this Life Tributes page to make it easy to share your memories.

Send flowers to the Nadolski family.