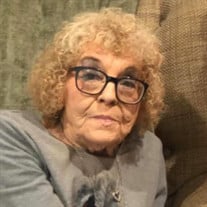 Peggy Ann Wright, beloved mother, grandmother, great grandmother and friend, passed away peacefully on April 28, 2020. Peggy was born in Terrell, TX on August 2, 1941 and she was reunited in Heaven with her father, Morris Carl McKeller, mother, Helen McKeller Aslin, siblings: Barbara Hall, Kate Lackey and John Gilbert Knowles and her precious grandson, Whit Cullum. Peggy was a lifetime resident of the Terrell area and she was a graduate of Terrell High School. During her life, she saw many changes as the communities around Terrell and in Kaufman County grew with new faces and the distinctions brought. She was a longtime and devoted employee of over 48 years at Falcon Steel/Mica Steelworks where she was a drafting assistant. Her beautiful smile and cheerful personality made every one instantly at ease when they met her and her attention to detail and her dedicated work ethic endeared her to colleagues and vendors. Peggy was an independent spirit who loved her family and time spent with her family were her favorite pastimes. Her generous heart for others was a hallmark of Peggy’s character and she will be missed by all whose lives she touched. Peggy is survived by her daughters: Vicky Wages and husband, Billy, Jr., of Frisco, TX and Carla Cullum of Alvarado, TX; grandchildren: Billy Wages, III, and wife, Jessica of Frisco, Cody Wages of Dallas, Andrea Cullum of The Colony, Keleigh Cullum of Denton, Coleton Cullum of Denton, and Carson Cullum of Denton; great grandchildren: Norah Wages, Emma Wages, and Olivia Miller; sisters, Joyce Mitchell of Rusk, TX and Virginia Chilcoat and husband, Gary of Terrell as well as several other extended family and a host of friends, all of whom dearly loved her. A graveside service will be at 2:00pm, Friday, May 1, 2020 at Oakland Memorial Park with Bro. Joey Wages officiating. For those wishing, memorials may be made in honor of Peggy to an organization of your choice.

Peggy Ann Wright, beloved mother, grandmother, great grandmother and friend, passed away peacefully on April 28, 2020. Peggy was born in Terrell, TX on August 2, 1941 and she was reunited in Heaven with her father, Morris Carl McKeller, mother,... View Obituary & Service Information

The family of Peggy Ann Wright created this Life Tributes page to make it easy to share your memories.

Send flowers to the Wright family.