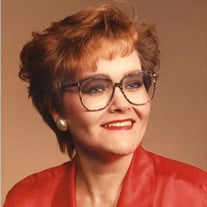 Penny Louise Romell Rhodes June 29, 1958 - December 14, 2020. Preceded in death by her husband, Darrell Lynn Rhodes, stepfather, Bobby Ray Anderson, and father, Robert Dean Romell. Survived by: Her mother - Virginia Louise Anderson. Siblings - Robert Harry Romell, Carol Denise Lancaster, Daniel Dean Romell, and Tommy Dean Anderson. Thirteen nieces and nephews: Dylan Shea Romell Robert Chase Romell Krystin Paige Wooten Danna Naedean Curtis Benjamin Daniel Lancaster Laura Kathryn Hammond John Luke Lancaster Samuel David Lancaster Ashley Dawn Romell Jacob Dean Romell Christopher Aaron Romell Tyler Rae McDaniel Tanna Renee Shelton Penny also left behind twenty-one great nieces and nephews. She moved with her family to Texas in 1970. First to Elmo then to Dallas (her favorite), to Abilene, Midland, Grapevine and back to Elmo, where she died. She and Darrell were married 9/9/1999 at 9:09 pm at the Fort Worth Stockyards Hotel. Darrell died of colon cancer a few short months later on 1/13/2000. Penny never remarried. Penny loved her family. Loved the beach. She was a stickler for perfection, good grammar, proper etiquette, and excellence. She had an eye for beauty. Her wardrobe was timeless (except for the 80’s). She read everything and edited as she read (with orange highlighter) — first edition books to paperbacks to magazines, notes, EVERYTHING. She rescued every member of her family and many of her friends from something (many of us often and regularly and some more than others) over the years. She was a heroine. Everywhere Penny worked, she rose to the top quickly and excelled. She was all her employers’ right-hand man. Penny walked under a dark cloud most of her life and for the last decade had resigned herself to staying in her cozy home she designed and decorated herself — with perfection, beauty, and excellence, of course. She surrounded herself with pictures of her family, her treasures and her books. There’s no one like Penny Rhodes. We miss her intensely. She will never be replaced or forgotten. Penny came to know Jesus in 1985 while attending Church on the Rock in Rockwall, Texas. Thankfully, we know she’s in heaven probably, only slightly, redecorating her mansion. A celebration of her life has been scheduled for 2 p.m. Monday, January 4, 2021 at Max Slayton Funeral Chapel.

The family of Penny (Romell) Rhodes created this Life Tributes page to make it easy to share your memories.

Send flowers to the Rhodes family.