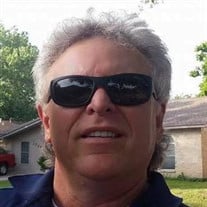 Randall Glenn Royal 'Nomad & Papi' was born September 16, 1959 to Coke & Reita Royal in Plainview Texas. He passed away on January 9, 2018 at the age of 58. Randall is preceded in death by his father, Coke Royal. He is survived by his loving wife, Susan Royal of Quinlan; mother, Reita Royal of Quinlan; sister, Tena Royal of Arlington; niece, Rio McGowan and great nephew Sawyer Hunt of Arlington; stepson, Myk Willis and wife, Jamie, of Lake Dallas; grandchildren: Trinity, Emma, and Mykey Willis; stepdaughter, Faith Hilty and Cale Heath and Rion Heath, of Garland; mother-in-law, Eva Beverley of Rowlett; aunt, Sherri Bedwell and husband Gerald of Plainview; brother-in-law, Bryan Beverley of Rowlett; sister-in-law, Lori Prentice and husband, Ricky, of Royse City; nephews-in-law & families: Doug & Ashlie Gadbury of Wylie, Jake Gadbury & Miranda Wells of Rowlett; great nieces: Shelbie Gadbury & Alicia Contreras as well as many extended cousins & family members, his best friend Danny King of Mineola and numerous other friends who loved him and will miss him dearly. Randall grew up in Garland, Texas and was a 1978 graduate of North Garland High School. He spent his summers as a kid on his grandparent’s farm in West Texas. Randall loved the outdoors which included boating, wake boarding, camping, snow skiing and skydiving. He was an avid car enthusiast from his very first car to the classic cars he restored & collected. He was known as the guy with the “cool” car. He expanded this later to include Harley's. He was a member of Dallas and Panther Creek HOG Chapters. Randall served as Co-Head Road Captain with Panther Creek from July 2002 - December 2003. Randall, known as “Nomad”, and Susan were some of the original members of "The Wrecking Crew", a group of bikers that represented Panther Creek HOG Chapter in the "Bike Games" where they were known and respected. Randall worked for Steakley Chevrolet right out of high school for about 14 years. He then went to work for Master Autobody for the next 23 years and was with Allstate for the last 2 1/2 years. He was a kind and well respected man who was honest, fun, and loved his family deeply. Most importantly, he was a Christian man and knew he was truly blessed. He will be greatly missed. A Celebration of Life service will be held on Saturday, February 3 at 2:00 pm at Max Slayton Funeral Chapel in Terrell, Texas. It would be Randall’s wish for donations to be made to Community Hospice, Relay for Life or Susan G. Komen Breast Cancer Association.

Randall Glenn Royal 'Nomad & Papi' was born September 16, 1959 to Coke & Reita Royal in Plainview Texas. He passed away on January 9, 2018 at the age of 58. Randall is preceded in death by his father, Coke Royal. He is survived by his loving... View Obituary & Service Information

The family of Randall Glenn Royal created this Life Tributes page to make it easy to share your memories.

Send flowers to the Royal family.